Shark-hunting harms animals at bottom of the food chain

On the surface, plummeting populations of sharks do not seem like much cause for concern for humans or, for that matter, other sea life. But this simple viewpoint relies on splitting animals into two groups - predators and prey. In practice, this distinction is far too crude. Too put it bluntly, there are predators and there are predators. Those at the top kill those in the middle, and stop them in turn, from killing those at the bottom. As the old saying goes, the enemy of my enemy is my friend.

The rise in shark fishing is mainly driven by a growing market for their fins. Shark fins soup is a delicacy in China, which is utterly ludicrous given that the fins themselves are tasteless and merely add texture. China's strong economy has put this expensive treat in the range of the expanding middle classes and the world's sharks are paying the price for it.

Ransom Myers from Dalhousie University, Halifax, decided to study the effects of declining shark numbers by analysing a uniquely comprehensive shark census taken over the last 30 years on the American eastern seaboard. In these waters, several shark species have all but vanished since 1972, including 99% of the bull, dusky and smooth hammerhead populations. And because fishing expeditions tend to catch larger individuals, the average size of the survivors has plummeted. Mighty animals like the tiger and black-tip sharks are now up to half as long as they used to be.

Unsuprisingly, as the sharks declined, their prey benefited. Great sharks mainly hunt smaller predators, including their close relatives skates, rays, and indeed, smaller sharks, whose numbers surged in their absence. The cownose ray, for example, is now ten times more common than it was in the mid-70s. And here's where the domino effects begin.

It turns out that large sharks inadvertently carry out a sort of protection racket for animals at the bottom of the food chain. By taking out the mid-level predators, they prevented these lesser hunters from decimating stocks of small fish and invertebrates. 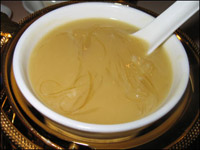 The cownose ray feeds mainly on shellfish like scallops, clams and oysters. In the 80s, their small numbers made little dent on the local scallop population which sustained the economies and stomachs of local seaside towns. But in 1996, the ray explosion started to spell the end for the scallops. By 2004, the local North Carolina scallop fisheries which had thrived for centuries were forced to close and remain closed to this day. Little did the locals imagine that the disappearance of dangerous sharks from their waters could have such strongly felt economic consequences.

This is far from an isolated incident. In Ariake Sound off Japan, shark fishing is particularly intense, and a booming population of long-headed eagle rays has decimated shellfish populations just like their cownose cousins in the Atlantic.

This is one of the first times that the removal of apex predators has been so thoroughly studied in the ocean. On land, the consequences are well-known. Just last year, Australian scientists found that in some areas, persecution of the local top dog - the dingo - has allowed introduced predators like cats and rats to kill off up to two thirds of ground-dwelling mammal species.

As for the great sharks, the responsibility for preserving these great animals lies with the only predators they themselves face - the fishermen who kill them, and the Asian restaurant-goers who create the demand for their fins. Surely, the price of irrevocably altering an ecosystem is too high to pay for the right to eat textured soup?