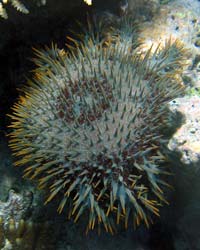 A complete ban on fishing can save coral reef communities in more ways than one. A few weeks ago, I blogged about a study which found that the coral trout, a victim of severe overfishing, was bouncing back in the small regions of the Great Barrier Reef where fishing has been totally forbidden. It certainly makes sense that fish will rebound when fishing ceases, but a new study reveals that the bans have had more indirect benefits - they have protected the corals from a predatory starfish.

The crown-of-thorns starfish (Acanthaster planci) is a voracious hunter of corals and a massive problem for reef conservationists. It's bad practice for any science writer to anthropomorphise an animal, but the crown-of-thorns really does look incredibly, well, evil. Its arms (and it can have as many as 20) are covered in sharp, venomous spines. As it crawls over the reef, it digests the underlying coral by extruding its stomach out through its underside.

From time to time, their numbers swell into plagues of thousands that leave behind the dead, white skeletons of corals in their wake. These outbreaks eventually die off as the starfish eat themselves out of food supplies, but not before seeding downstream reefs with their tiny larvae that drift along the southern currents. During their peak, they destroy far more coral than other disturbances such as bleaching events or hurricanes.

Now, Hugh Sweatman at the Australian Institute of Marine Science has found that these outbreaks are much less frequent in the "no-take marine reserves", where fishing is absolutely forbidden. Every year between 1994 and 2004, Sweatman carried out a census of starfish numbers in up to 137 areas across the Great Barrier Reef's massive length. 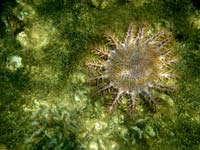 It's possible that the protected fishes eat starfish, but the coral trout, whose populations have boomed in the no-take reserves, specialise in hunting fish not starfish. Sweatman thinks that the links between fishing and the crown-of-thorns is more complicated. His idea is that protecting the big fish like coral trout controls the numbers of smaller fish like wrasse. That puts less pressure on the populations of small invertebrates that in turn, feed on baby starfish. So, more big fish means fewer small fish, which means more invertebrates, which means fewer starfish.

That certainly sounds convoluted, but other studies in recent years have provided examples of similar domino effects cascading down food chains. For example, the loss of big predators like sharks in the eastern seaboard of America destroyed local populations of scallops, clams and oysters, to the extent that local economies went bust. Sharks obviously don't feed on shellfish, but they do eat mid-level predators like rays and skates. Without the sharks to keep them in check, these intermediate hunters flourished and took out record numbers of animals at the bottom of the food chain.

So Sweatman's theory has precedents elsewhere, but it's also testable. Baby starfish live hidden in rubble after they settle in a new location and if Sweatman is right, the diversity of small invertebrates living among this rubble should differ between the no-take areas and the fished ones.

Regardless of the chain of events, it's clear that establishing no-take reserves is an effective way of stemming the crown-of-thorns' onslaughts. That's would be a massive coup for conservationists, especially since some of the richest and most threatened reefs on earth fall within the natural range of the crown-of-thorns.

Just a few weeks ago, I wrote about a paper which classified a third of reef-building corals as threatened with extinction or worse. Any step that we can take to protect these most beautiful of ecosystems is one worth taking, and if the measures have other proven benefits - as the no-take reserves do - establishing them becomes even more compelling.