In 1979, somewhere in Dartmoor, a butterfly died. That would hardly have been an exceptional event, but this individual was a Large Blue butterfly (Maculinea arion) and it was the last of its kind in the United Kingdom. Over more than a century, the Large Blue's population had been declining and it was finally declared nationally extinct 30 years ago.

Now, it's back. A bold conservation effort managed to work out the factors behind the butterfly's decline, and resurrect this vanished species. The Large Blue's reintroduction has been one of conservation's flagship successes and it was the first time that efforts to save a declining butterfly had actually paid off.

The victory hinged on strong science. Rather than relying on speculation and optimistic measures, a team of scientists led by Jeremy Thomas, David Simcox and Ralph Clarke carefully analysed the factors behind the butterfly's decline to find the best ways of reversing it. Work started in 1974 and the butterfly staged its comeback in 1983. Now, on the 25^th anniversary of its reintroduction, Thomas, Simcoxand Clarke describe their efforts to bring the charismatic Large Blue back to England's green and pleasant lands.

The Large Blue butterfly has a very strange lifestyle. When it hatches in July, its caterpillar feeds on thyme plants for three weeks and then drops to the ground to begin a more leisurely existence. The caterpillar so strongly mimics the smells and soundsof the ant Myrmica sabuleti that it is carried to the colony and cared for as if it were an actual ant. It spends the next 10 months of its life in this sheltered environment, and its mimicry ensures that its surrogate parents leave it alone, even when it eats their young. 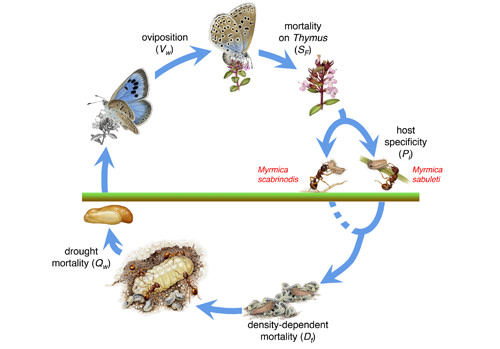 So the fate of the Large Blue is closely intertwined with that of M.sabuleti, the ant it parasitizes. The butterfly's problems started when subtle changes in grazing and local vegetation caused its host to be replaced by other types of ants that were unsuitable babysitters. Despite setting up nine protected areas between 1930 and 1969, conservationists failed to slow the butterfly's decline. By 1972, it has dwindled to just two colonies of 325 adults living in Dartmoor and seven years later, these too had disappeared.

To understand why, Thomas and colleagues conducted a comprehensive survey of the Large Blue's Dartmoor stronghold in the six years before it went extinct. They charted 18 factors, from the adults' range to where they lay their eggs, from the health of caterpillars feeding on thyme to their adoption by ants. Based on their data, the group created a mathematical model to describe the factors that influence the population size of the Large Blues and optimise any future conservation projects.

It was this study that identified the importance of the ants. Only factors related to the ants affected the size of the butterfly population including the presence of queen ants and the numbers of caterpillars within ant nests. The presence of M.sabuleti, the butterfly's host of choice, was critical, for larvae were five times more likely to survive to adulthood if they were taken in by the right species. Specifically, this species needs to coexist in the same area as thyme - the butterfly's initial plant host. In the years before the butterfly died out, there was little overlap between the ranges of the plant and the ant.

It turned out that M.sabuleti is very sensitive to its surrounding vegetation. If the turf around it grows taller than 1.4cm, the overgrown plants lower the temperature of the surrounding soil where the ants' brood-chambers are found. They are soon outcompeted by other species that are less dependent on warm soil and their numbers fall.

That's exactly what happened in the 1970s. The cause was myxomatosis, a disease that was unintentionally introduced into Europe in the 1950s and killed off the rabbits that grazed the hillsides where M.sabuleti lived. The demise of the rabbits started off a complex ecological chain reaction - it allowed the turf to overgrow, cooling the soil, forcing out the ant and depriving the butterfly of the host it depended on. Bad weather delivered the coup de grace to the ailing Large Blue population. In 1974, prolonged wet periods reduced the number of days when the females could lay their eggs and in 1975, a drought reduced the lifespans of the females.

All of this was discovered through the scientists' meticulous work. Their data also allowed them to rule out one of the more popular theories of the time - that the nets of butterfly collectors were behind the Large Blue disappearance. In fact, steps taken to deter collectors actually worsened the situation - one fence erected to keep lepidopterists out also excluded grazing animals, leading to overgrown turf and the rapid extinction of the local Large Blues! It's a striking example of how poorly researched strategies can backfire.

Armed with new knowledge, the Large Blue Project began earnest efforts to save the butterfly. They restored 52 thyme grasslands to the right conditions for M.sabuleti, which were quick to exploit their regained habitat. At one site in Dartmoor, the ant was totally absent in 1973 or 1974 but covered the majority of the thyme grasslands just ten years after the scrub was cleared and grazers were brought back. Similar events took place in other grasslands and some ants even managed to form super-colonies, so enticing were their new homes.

With the hosts set up, the Large Blue Project brought back the butterflies. They found a suitable donor race in Sweden and started releasing them at prepared sites in 1983. They thrived and by 2008, over 30 separate colonies had been set up. The largest populations now contain around 4,000 to 5,000 adults, around ten times as many as any previously recorded populations around the world.

Other European countries have followed the UK's lead, and the IUCN has downgraded its status from Vulnerable to Near Threatened. The research has even been extended to help other butterflies that live in similar habitats, and two of these species are also witnessing climbing populations. It's testament to the power of research and an evidence-based approach to conservation.