New research reveals how you might tailor a lawn to the types of insects you want to attract for pollination or pest control. 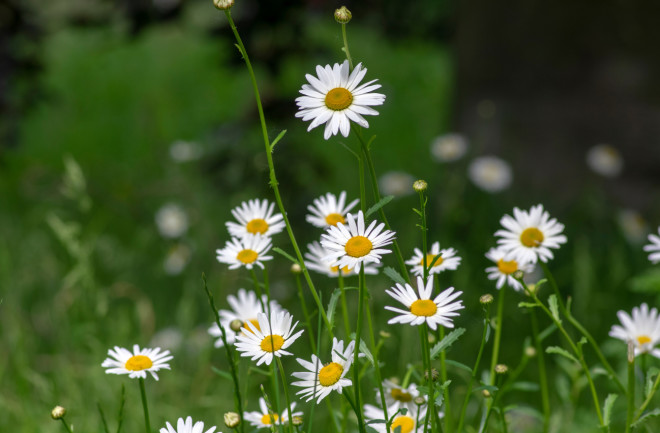 Sacrificing a small patch of your garden may be enough to greatly improve the plight of bees at a time when pollinators are suffering huge declines. “A small wildflower patch or a mini meadow in your garden could have big benefits for biodiversity,” says Janine Griffiths-Lee, a PhD candidate in conservation biology at the University of Sussex. “Just a little corner would do wonders.”

Pollinators are declining around the world for a number of reasons, including pesticide use, climate change and predation by invasive species. And it’s not just pollinators — insects in general are dropping hugely in abundance and diversity across the planet, ripping out a whole baseline ecosystem that provides food for the next level up on the food chain.

Without pollination, many of our crops and orchards couldn’t produce the fruits, nuts and grains that feed not only us, but much of the livestock that we also rely on for meat and dairy products. In fact, more than 90 species of specialty crops in the U.S. alone require pollination, according to the Department of Agriculture. The agency estimated in 2017 that wild and managed bees add $15 billion to the country’s crop value every year — and warned that reversing pollinator decline is critical to feeding ourselves in the future.

Much of the work to improve pollinator habitats is focused on croplands, where the loss of bees and other arthropods brings about the most repercussions. But urbanization is growing at a large pace in many parts of the world, converting wild lands with abundant native plant diversity into subdivisions complete with matching grass lawns.

These lawns represent a monoculture, leading to a less diverse insect community. This, in turn, can also impact the diversity of birds and other large animals that feed on insects in these urban areas. In England and Wales, Griffiths-Lee says, 97 percent of wildflower meadows have been lost since 1984. She wondered whether having a small patch of wildflowers in your garden could help address this loss.

Read More: Your Perfect Lawn Is Bad for the Environment. Here’s What to Do Instead

In recent research published in the Journal of Insect Conservation, Griffiths-Lee and her colleagues enlisted 150 volunteers across the U.K., from the Outer Hebrides archipelago in northwestern Scotland down to Cornwall in southwestern England. They divided the citizen scientists into groups of three; one group received a seed mix of commercially available wildflowers, while a second group received a seed mix of wildflowers believed to specifically be beneficial for pollinators, devised through the help of entomologists.

These two groups sowed their seeds in two-by-four-meter patches, but the third group didn’t receive any seeds at all. The researchers then asked each citizen scientist to set insect traps around the mini meadow — flowers or no flowers — and send them back to Griffiths-Lee’s team from May through August in 2016 and 2017. Back in the lab, the team divided these delivered arthropods into taxonomic groups, paying closer attention to the main pollinators of the region (bees and hoverflies) and classifying them by species. “This gave us quite a bit of information about what was in their gardens,” Griffiths-Lee says.

The researchers found that, regardless of the type of seed mix used, gardens boasting mini meadows saw more than a twofold increase in bumblebees the year after the meadow was sown. The seed mixes also attracted 87 percent more solitary bees in the second year, and 85 percent more solitary wasps. While the latter aren’t pollinators, they can still improve the health of a garden by preying on pests that might otherwise damage fruits and vegetables.

The two types of seed mixes differed a bit in terms of the types of insects they attracted: The commercially available mix was more tempting to solitary and bumblebee species, and also significantly increased bee diversity compared to its entomologist-curated counterpart. That being said, this more targeted mix was indeed attractive to solitary wasps. The results indicate how residents might tailor their gardens to the types of insects they want to attract for pollination or pest control.

Griffiths-Lee says that she hopes this study adds to the growing effort to push people to improve the plant diversity of their yards. Efforts in the U.K. — like “No Mow May,” a push to stop homeowners from cutting their grass in the spring’s blooming season to improve plant and pollinator diversity — have already gained traction. Now, adding a focus on planting wildflower species in yards and elsewhere could improve the overall insect and pollinator diversity in booming urban areas.

“If it was integrated into urban planning, I think you’d see massive results,” Griffiths-Lee says.