Will gardeners of the future bribe bees and butterflies with homemade, saltwater solutions? Plants could already be employing the same technique. 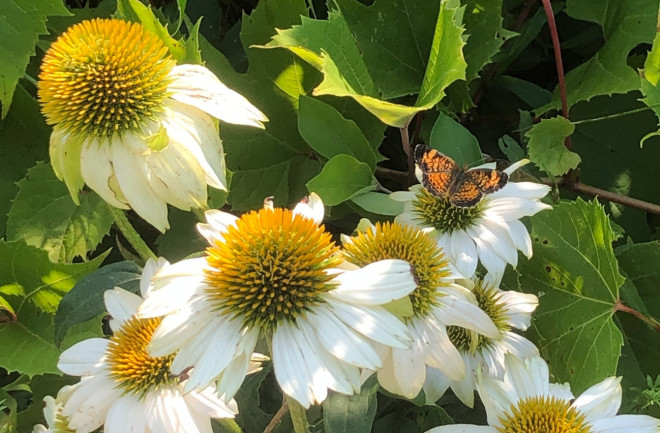 From coffee to blueberries, more than 75 percent of the leading global-scale food crops — and nearly 90 percent of all wild flowering plant species — rely at least partially on pollinators like bees, ants and butterflies. Because these insects are so essential to our own food systems, scientists are seeking new ways to keep them healthy and fed.

One approach could involve sweet-and-salty nectar, according to new research. A team led by University of Vermont undergraduate Carrie Finkelstein placed five plant species — half of which contained an artificial, sodium-enriched nectar — in a meadow about the size of a basketball court and observed them for three hours a day. As reported in Biology Letters earlier this year, the flowers enriched with sodium attracted twice as many pollinators as their blander equivalents.

Previous work on honeybees has shown that they can detect sodium with their legs, of all things. But knowing they savor the salt could help small-scale and home gardeners attract bees and butterflies to their garden. Gardeners could, for example, “hack” the system by depositing a solution containing 1 percent salt on the parts of their flowers that dispense nectar (which varies depending on each plant species’ anatomy). First, however, researchers must determine the effect that this might have on the health of both pollinators and the pollinated.

Most existing research focuses on macronutrients, like nitrogen and phosphorus, but the lesser-appreciated micronutrient sodium could possibly change our understanding of plant biology altogether. “It's been incredibly under-studied,” says Nate Sanders, a co-author of the newest study and an ecology professor at the University of Michigan.

One theory is that plants don’t want sodium in their leaves because it causes animals to munch them down to nothing. To illustrate this, Sanders recalls a “failed experiment” he conducted in a mountain meadow in Colorado years ago: In one quadrant of the meadow he sprayed saltwater and in another, he sprayed pure water. When he returned 24 hours later, expecting a leap in insect abundance, he was shocked to find the meadow had been completely mowed down by mule deer — who apparently also enjoy a salty meal.

Sodium might also suck the water out of flower cells. For these reasons, plants could shunt it to their nectar, attracting more pollinators to the flower and saving its leaves from being devoured. “It’s an interesting trade-off,” says Finkelstein. “Plants don't like sodium. And so, how can you balance one thing that could potentially be beneficial — to be surrounded with organisms like pollinators — without compromising the integrity of the plants in which they're visiting?”

A Matter of Taste

Studying sodium in plant-pollinator interactions also sheds light on foraging behavior, which can potentially explain why some plant species do better than others, explains Finkelstein. Pollinators may be more active in areas with naturally or artificially higher salt levels, such as on the coast or near a salt-treated road. And as climate change alters weather systems, the sodium content in plants may change as well.

Another recent study in the journal Ecography studied herbivorous insects and their reliance on sodium from a biogeographic perspective. Joshua Lynn, a postdoctoral fellow at the University of Bergen in Norway and lead author of the paper, scoured the scientific literature for data on insects’ consumption of plants. He then combined it with maps to find that latitudes of greater sodium deposition experienced greater plant consumption.

His research refutes an old-timey latitude theory, which stated that herbivory increases toward the tropics no matter what. “It's a zombie idea that keeps on consuming people's brains to keep trying to test it,” says Lynn, adding that both oceans and cities may even be getting saltier due to climate change. This could be a problem for plants that are devoured by salt-hungry insect herbivores. On the other hand, plants pushing sodium into their nectar could potentially benefit by these increasing pollinator visits.

The sweet-and-salty nectar study results may simply mean that salt tastes good to bees and butterflies. But what really interests Sanders is how this affects pollinator health; just like humans, too much salt can be bad for insects. A 2014 study published in PNAS, however, showed that slightly saltier diets, due to road salt, increased male muscle mass and female brain size in two species of butterflies.

Emilie Snell-Rood, lead author of that paper and an associate professor of ecology, evolution and behavior at the University of Minnesota, cites evidence that male butterflies that foraged for minerals such as sodium in wet mud had better flying ability. She speculates that female butterflies who consume salt may have improved vision, which leads to higher skill at locating plants to lay their eggs on.

Questions remain, of course. Snell-Rood hopes to see more research done on the plant side of the equation: “What plants are going to deal better with human influences in terms of salt?” Lynn also hopes to see more work done on how salt might benefit plants on a population-scale by possibly increasing yield. And Finkelstein is fascinated with how pollinators detect salt and how salt plays a role in human access to food.

For now, it’s clear that pollinators can detect sodium in nectar — and they seem to really like it. “I tell people to imagine doing an experiment where you put out a big bowl of unsalted french fries right next to a big bowl of salted french fries and just let people pick which one they want,” Sanders says. “Pollinators are just as wise to sodium as we are. We do it for taste, but they're likely doing it also to increase their fitness.”