Your Perfect Lawn Is Bad for the Environment. Here's What to Do Instead 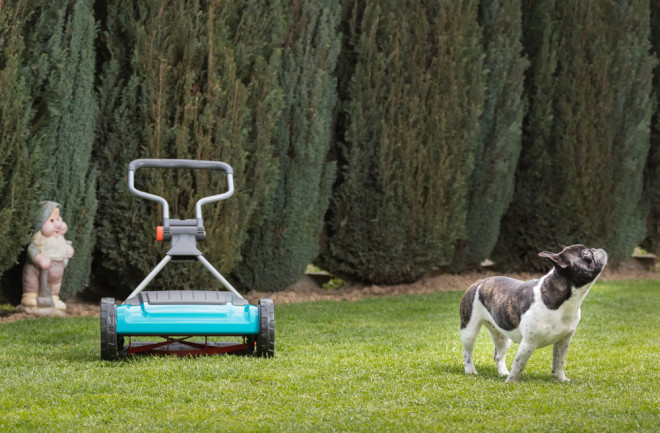 The deep emerald hue of freshly clipped grass can paint the picture of suburban serenity. In some versions of the American Dream, the perfect lawn represents a keystone of success — often complementing a two-car garage and happy family, or perhaps compensating for the lack of such trappings.

“It’s the status symbol of leisure, that you have time to care for these landscapes,” says Susannah Lerman, a research ecologist with the U.S. Forest Service.

Lawns are so ubiquitous that Lerman says the U.S. claims an estimated 163,800 square kilometers of lawn space across the country, including parks and golf courses. That’s basically the combined land mass of Maine, New Hampshire, Vermont and Massachusetts. But cultivating your own minuscule patch of turf comes with a number of ecological and environmental consequences. The unsustainable risks range from a depletion of water aquifers to the devastation of local ecosystems. A perfect lawn can also contribute to rising carbon dioxide emissions.

Sucking Out the Life

One of the main problems with lawns is that they often contrast so strongly with native ecosystems, Lerman says.

The popularity of lawns spread with European colonization of the Americas. Even most of the grass species found in U.S. lawns are European. This type of grassy ecosystem might jive alright with the natural ecosystem in some parts of the U.S. — green fields interspaced with glades of trees may not be that out of place in wild areas of New England, for example. But lawns are wildly out of step with the natural ecosystems of dry places like Phoenix or San Diego in the Southwest.

The grasses used in your typical cookie-cutter home don't thrive naturally in arid areas. If you are in the desert, or even in an area that doesn’t get substantial rain in the summer, you likely need to pump groundwater stored in depleting aquifers to maintain your grass.

“Short, green lawns are embedded in our laws, and those lawns require water in the summer. It may not be as much as agricultural use, but it adds up and depletes urban aquifers,” Randal Barnes, a University of Minnesota professor, writes in this post.

Climate change is leading to increasing droughts in many parts of the world, so sustaining a perfectly green lawn can be a drain on precious resources in some areas.

Water usage aside, lawns also create a type of monoculture that represents the opposite of a biodiverse ecosystem. If the only thing you have in your yard is grass, the area is likely not attracting a plethora of different insect species.

Read More: Pollinators Are In Trouble. Here's How Transforming Your Lawn Into A Native Wildflower Habitat Can Help

This may seem perfectly fine to bug haters, but we’re not just talking about beetles and mosquitos. Pollinators like bees, moths and butterflies are vital for the growth of your flower bed, apple trees and the farms surrounding your town. Without pollinators there would be no cherry blossoms or berries. Without berries, and the insects that live on the plants, birds would be hard-put to make a living in your neighborhood.

Lerman says that by giving space in your yard to bushes, plants and trees of different sizes, you can diversify the types of ecosystem niches available to the bees and birds. You can even help to diversify your yard by changing the height of the grass itself.

Research Lerman conducted in Massachusetts showed that being a lazy lawnmower actually improves the diversity and abundance of bees. She and her colleagues gave free lawnmowing services to homes in Massachusetts. They cut some lawns on a weekly basis, some every two weeks and others just once every three weeks.

They found that the lawns cut every third week had the larger number of bee species, but not significantly different than those cut every two weeks. The most frequently shaved lawns had the lowest diversity.

For Lerman, this study shows that at least in Massachusetts, the two-week treatment is the sweet spot, if you’re weighing in the cultural expectations of a well-kept yard. Participants that had to wait every three weeks for their lawn-mowing were eager to see the researchers come back compared to the other two treatments. Some from the three-week treatments even said they had to ward off well-meaning neighbors from mowing their lawns for them.

“You can’t just go at [people] from an ecological point of view,” Lerman says. In other words, the best thing ecologically might be wild, waist-high grasses in some areas, but it’s hard to change the predominant belief that well-kempt lawns are equated with house value. And even if one person might be onboard with that, their neighbors likely don’t agree. “Culturally and socially, people weren’t ready,” Lerman adds.

Not all biodiversity sits right with home residents, though. Spiders and other insects play important roles in the ecosystem, but they might creep people out. Ticks are an especially large concern as they can cause disease. On that front, Lerman’s research has shown that frequency of lawn mowing made no detectable difference on tick activity.

Research has also drawn some interesting comparisons between the carbon impact of gas-powered lawnmowers and tree coverage in yards.

Lawnmowers, especially the type you can sit on and operate with a cold drink on a Saturday afternoon, contribute greenhouse gases to the atmosphere, Lerman and colleagues found in one study. But sunny lawns rather than those with trees also take a toll on the climate. Neighborhoods without trees are often hotter on average than shady tree-draped areas. This can have an impact on air-conditioning bills, Lerman says, which drives up carbon consumption.

“The take home message was that more trees —more shade – is really what’s going to help with lowering carbon emission,” Lerman says. “Everyone has this opportunity to contribute to conservation in their back yard.”

She adds that some municipal and state governments are waking up to this conundrum, creating new rules conserving irrigation or offering subsidized bee-friendly lawns. Las Vegas has recently proposed a ban on grass, according to the Associated Press, while California has enacted various regulations on yard irrigation during droughts.

As far as working with neighbors who may not be so keen on your conservation efforts, Lerman points to the Forest Service’s “Lazy Mower” signs online that you can print and post.  “When you think about it, it’s a lot of work to keep these lawns looking nice. Is it worth it?” Lerman asks. “The lazy lawnmower is perfect.”