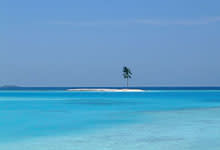 The newly elected president of the Maldives, the island chain south of India, says his country must start saving up money to buy a new homeland, in case global warming causes sea levels to rise so much that the waves submerge the archipelago entirely. Says Maldivian President Mohamed Nasheed:

"We can do nothing to stop climate change on our own and so we have to buy land elsewhere. It's an insurance policy for the worst possible outcome.... We do not want to leave the Maldives, but we also do not want to be climate refugees living in tents for decades," he said [The Guardian].

white sandy beaches are a major tourist attraction bringing in billions of dollars every year.... Mr Nasheed's plan is to create a "sovereign wealth fund" using tourism revenues to buy land so that future generations will have somewhere to rebuild their lives if they have to leave. He wants somewhere within the region, where the culture is similar - possibly India or Sri Lanka [BBC News].

However, Nasheed also mentioned Australia as a possibility, because of the vast swaths of unoccupied land on that continent. Sea levels around the Maldives have already risen about eight inches over the last century, and the United Nations has warned that the ocean may rise an additional two feet by 2100 as a result of global warming. Government officials have warned that even small increases in the future could force many of the 300,000 islanders to flee.

Environmentalists say the issue raises the question of what rights citizens have if their homeland no longer exists. "It's an unprecedented wake-up call," said [climate change activist] Tom Picken.... "The Maldives is left to fend for itself. It is a victim of climate change caused by rich countries" [The Guardian].

The government isn't planning to abandon the islands precipitously; a spokesman says the nation will

seek international help to strengthen the natural barriers of the Maldives’ coral reefs, and to create artificial sections of reef as a buffer against rising seas. It has also pledged to introduce solar power and seek foreign investment in other alternative energy technologies. But like the previous government, Mr Nasheed has no plans to cut the polluting long-haul flights on which tourism depends. Instead, his Maldivian Democratic party says it will introduce corporate taxation in the industry as part of a raft of fiscal reforms [Financial Times].