Why Do We Give Red Roses On Valentine’s Day? 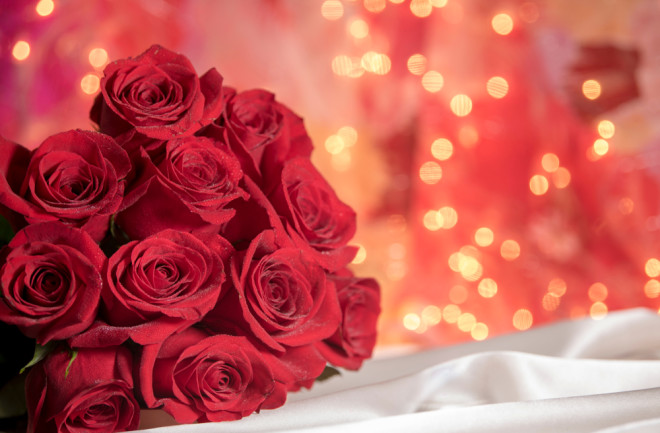 For centuries, the red rose has been a symbol of love, passion and romance. The delicate yet thorny flower has an ornate history when it comes to its association with deep intimacy — especially on Valentine’s Day. But it’s also an emblem of secrecy. Stemming from ancient mythology and Roman conquest to secret marriages and discreet messages, the symbol of the rose has followed a long road to become the staple of a Valentine’s Day bouquet.

A Rose By Any Other Name…

Fossil records indicate that the rose is an extremely ancient flower, likely originating in Central Asia tens of millions of years ago. But for a more poetic version of its inception, turn to one of the several ancient stories that tell of how roses came to be associated with love. Some of the most famous come from Greek mythology.

According to the Greek poet Anacreon, the white rose first appeared during the birth of Aphrodite, the goddess of love; and it's from her blood that roses later became red. The goddess discovered a plot against her lover, Adonis, who would be mauled by a boar while hunting. Cutting her foot on some rose thorns as she rushed to warn him, specks of blood splashed the white petals and stained them crimson. (Unfortunately, she reached Adonis too late and he died from a wound to his leg.)

Another legend says that Aphrodite's son Eros — whom she named the flowers after by rearranging just one letter of his name — later gifted a rose to Harpocrates, the god of silence, to bribe his secrecy over Aphrodite's indiscretions.

While the rose has always remained a symbol of love, the story of Eros bribing Harpocrates  to keep quiet about Aphrodite's affairs has also associated it with secrecy. In fact, the myth became so popular in Ancient Rome that homeowners painted roses on their ceilings as an indicator that "what’s said in this house stays in this house." Guests were expected to use discretion on anything uttered sub rosa, Latin for "under the rose."

When Christianity began to spread, Bible stories incorporated roses as well. The Virgin Mary, a symbol of love and purity, is said to be crowned in thornless roses because she is without sin. And the Catholic church often decorates confessionals with roses as a sign of confidentiality during confession.

It's from a Christian martyr, St. Valentine, that we get the modernized version of Valentine’s Day. Legend has it that the Roman priest defied Emperor Claudius II and married young couples in secret Christian weddings so the men could leave the army. St. Valentine was sentenced to death — but before he died, he wrote a note to the jailor’s daughter that said, “From your Valentine.” Though there are several historical references to St. Valentine, the idea of Valentine's Day as a celebration of love has been ongoing since the 14th century.

As the celebration of Valentine's Day moved away from its religious roots, roses were still used as a form of secret language. During the Victorian Era, flowers took on different meanings and messages. The color of roses also mattered — and these symbols still hold true today. Red roses are a symbol of love and passion. Yellow roses symbolize friendship. Orange roses symbolize desire. And pink roses symbolize gratitude.

But color isn’t the only thing that matters when giving or receiving roses. A typical bouquet of roses contains a dozen stems because they symbolize the 12 months in a full year and the 12 signs of the zodiac. The number is a symbol of perfection and completeness. In other words, if you're preparing for a perfect Valentine's Day this year, don't spring for the smaller arrangement from your supermarket's floral section.

From Aphrodite and her lost love to the Victorian language of flowers, the red rose continues to be a symbol of passion and deep intimacy. It goes to show that love can be beautiful and painful, like a red rose and its thorns, but it can also stand the test of time.