Why Do Meteoroids Explode in the Atmosphere? 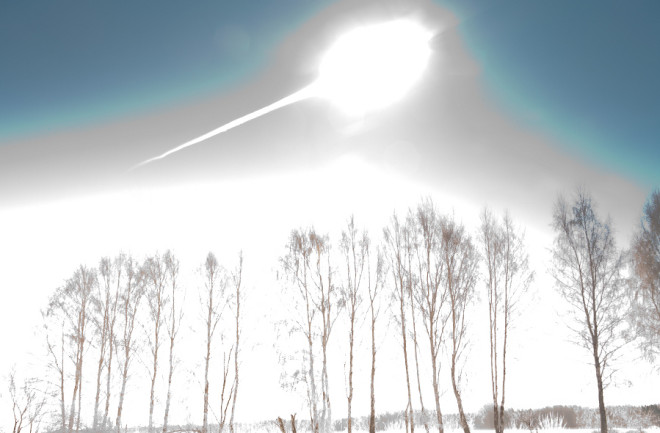 Photographer Marat Ahmetvaleev was taking panoramic photos of the winter landscape when he captured this beautiful image of the Chelyabinsk meteoroid as it exploded over Russia in 2013. (Credit: M. Ahmetvaleev/NASA APOD)

Within a few seconds, the cosmic projectile detonated 12 miles above the Chelyabinsk region of Russia, releasing as much energy as about 30 Hiroshima atomic bombs. This created a gigantic fireball — known as a superbolide — that caused shock waves to propagate outward for dozens of miles, damaging several thousand buildings and injuring 1,500 people.

Though the progenitor of the explosion had an initial mass of over 10,000 metric tons, only about 0.1 percent of that mass is believed to have reached the ground, indicating that something in the upper atmosphere not only caused the rock to explode, but also caused it to disintegrate much more than expected.

Monday, a team of researchers published a study in Meteoritics & Planetary Science that proposes a new and previously overlooked mechanism for air penetration in meteoroids, which could help explain the powerful breakup of the Chelyabinsk meteoroid.

According to the paper, as a meteoroid hurtles through Earth’s atmosphere, high-pressure air in the front of the object infiltrates cracks and pores in the rock, which generates a great deal of internal pressure. This pressure is so great that it causes the object to effectively blow up from the inside out, even if the material in the meteoroid is strong enough to resist the intense external atmospheric pressures.

“There’s a big gradient between high-pressure air in front of the meteor and the vacuum of air behind it,” said the study’s co-author Jay Melosh, a professor of Earth, Atmospheric, and Planetary Sciences at Purdue University, in a press release. “If the air can move through the passages in the meteorite, it can easily get inside and blow off pieces."

According to the paper, “This process of pressure internalization, new to meteoritic studies, would not have been recognized without a two-material fluid dynamics code.” This unique computer code allowed researchers to generate models that let both air and solid material coexist in any part of the calculation.

“I’ve been looking for something like this for a while,” Melosh said. “Most of the computer codes we use for simulating impacts can tolerate multiple materials in a cell, but they average everything together. Different materials in the cell use their individual identity, which is not appropriate for this kind of calculation.”

Though this process of air penetration is a very effective way for our atmosphere to shield us from smaller meteoroids, larger and denser ones will likely not be as affected by it. However, the more we can learn about how different meteoritic materials explode, the more prepared we can be for the next Chelyabinsk.

This article originally appeared in Astronomy.com