Why Did Our Paleolithic Ancestors Paint Cave Art?

Cave paintings are the oldest known art. But we can only speculate about their meaning. 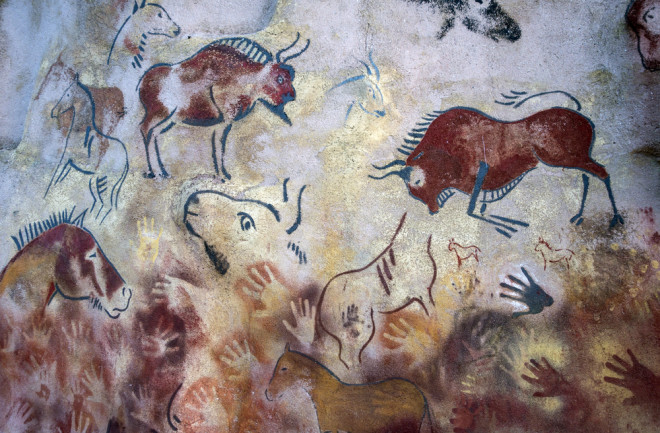 In the dark recesses of hundreds of caves around the world, our prehistoric ancestors painted lush panoramas of ancient animals — herds of herbivores racing across the caves’ walls and fearsome predators stalking their prey. Tens of thousands of years later, the vibrant colors and uncanny sense of motion still move us.

No one knows why our prehistoric ancestors painted cave art. The paintings are mostly located in deep caves and areas that are difficult to access, showing no signs of living spaces.

That’s one reason why many experts think that rather than decoration, cave art served ceremonial or religious purpose, and perhaps was used for shamanic ceremonies blessing the hunt or conferring protection.

Read more: 5 of the World’s Most Fascinating Cave Paintings

While most cave art discovered so far is in Europe, examples have been found on every continent except Antarctica.

Earlier paintings themselves were more abstract, but later examples feature identifiable animals and sometimes humans. Most animals depicted in cave art are the herbivores our ancestors hunted: deer, bison, mammoths and ibex. However, in some caves, particularly the Chauvet cave in southern France, the images feature cave lions and cave bears – predators of both the herbivore herds and the humans.

What the Cave Art Could Mean

Still, the images aren’t frightening. They seem to have been painted with reverence and respect rather than fear and trembling. This led science writer David Quammen to speculate in his 2003 book Monster of God that the people who painted the images on the walls of the Chauvet Cave:

… recognized more than danger, strength, and power. They also saw grace, grandeur, lordly confidence, quietude, mercilessness, keen attention, and some sort of all-driving primacy in those ferocious beasts; and they took pains to register, to preserve, even somehow to adopt what they saw through the medium of charcoal on rock. Call it shamanism, call it totemism, call it idolatry. Call it, simply, art.

Since the images often seem to tell stories, depicting scenes of hunting and what seem to be narrative depictions of prehistoric life, some scholars suggest that cave paintings may have been central in the development of symbolic thinking and the emergence of language.

In a 2018 paper, an international team of researchers argues that cave paintings (along with rock art) might offer a glimpse of the shift to an internalized system of thought that eventually developed into externalized language.

“If this turns out to be true,” the study’s authors write, “the often-stated idea that ‘language does not fossilize’ is not quite true: pieces of externalized language may turn out to be hidden among the art forms produced by our early modern human ancestors.”

Though we may not know why Paleolithic people painted on the walls of caves, we now may know more about who the artists were. In many of the caves, in addition to pictures of animals, cave art features stencils of human hands. These may be a form of signature, and to the surprise of many, the prints may not have been left by men.

A 2013 study published in American Antiquity looked at handprints in caves in France and Spain. Based on the ratios of the lengths of the index, ring and little fingers, the study found that 75 percent of the handprints (24 of 32) were of women’s hands. Only three were made by men; the other five were made by adolescent males.

This evidence suggests that women played a more important role in hunter-gatherer societies and perhaps in the spiritual life of these people than was previously thought.

We may not know why our ancestors painted on the walls of caves, but those paintings still have a lot to teach us.