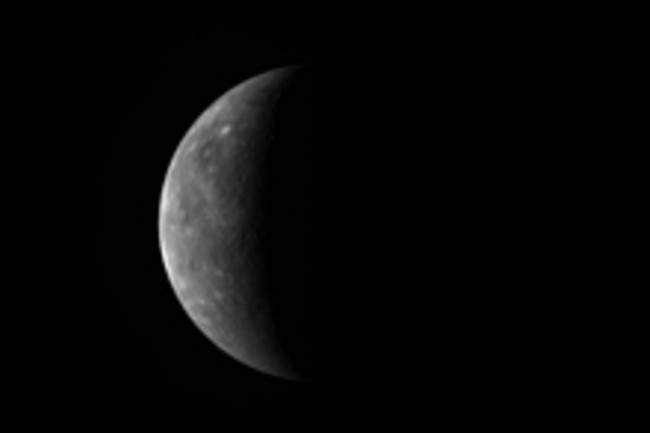 Today in the innermost region of our solar system, NASA's Messenger space probe will swoop past Mercury for the third and final time. The maneuver will give scientists a close look at the dense, iron-rich, oddball planet, and will also alter the probe's trajectory and prepare it to begin orbiting Mercury in March 2011.

As Messenger travels within 142 miles of Mercury at 12,000 miles per hour, the spacecraft’s camera will swivel to stare at a succession of craters and other geological features.... One target will be an old 90-mile-wide crater. Another will be young 13-mile crater and a splash of light-colored soil surrounding it. A third crater of interest has materials of unusual color perhaps produced by violent volcanic eruptions [The New York Times].

When this third flyby is complete, 95 percent of the planet will have been mapped in high resolution. Scientists will also take a moment to examine the stream of charged atoms that start at the planet's surface and extend millions of miles into space in a comet-like, gaseous tail. The

ions bleed from Mercury's surface as it is blasted by the full force of the solar wind, a stream of particles from our star which buffets the entire Solar System [BBC News].

While researchers are waiting eagerly to see what the flyby's measurements and pictures will reveal, they're keeping in mind that the best rewards will come later, when Messenger becomes the first spacecraft to orbit Mercury and begins a year-long study of the planet. Therefore, the most crucial element of the flyby is that Mercury's gravity will act as a brake for the probe, setting it on a trajectory to enter orbit in one and a half years. Explains mission scientist Eric Finnegan:

"Slowing the spacecraft by [5,900 miles per hour], Messenger's orbital period around the Sun will be decreased by 13 days, closely matching the 88-day orbital period of the innermost planet" [BBC News].