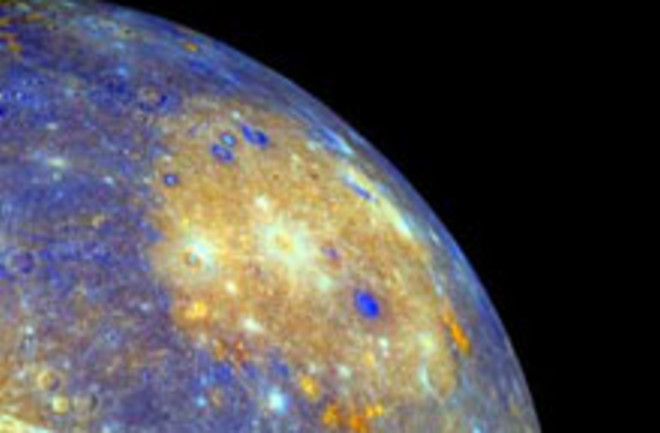 Last January, NASA's Messenger probe swooped past Mercury, dipping down to within 125 miles of its surface to take pictures and scientific measurements of the solar system's smallest and hottest planet. Now the results have been analyzed, and researchers say the little planet is full of surprises. Among other revelations, researchers realized that Mercury has a molten iron core that accounts for its strong magnetic field, but that its core is cooling, which explains the fact that the planet has shrunk more than a mile in diameter. Mission scientist Sean Solomon explains:

Because solid iron is denser than the liquid form, "as you grow the inner core, the whole volume of the core shrinks," he says, causing the planet itself to contract [Scientific American]. Messenger's pictures reveal steep cliffs called "scarps" that researchers believe were pushed upward by the planet's contraction.

The intriguing findings may win some respect for Mercury, researchers say. Mercury has long been considered little more than a hot rock, with daytime surface temperatures ranging up to 1,100 degrees Fahrenheit. But Messenger has uncovered a more surprising place, with peaks reaching up to 15,000 feet and vast basins stretching hundreds of miles across the planet's surface....

"[W]hen you experience Mercury close up, you perceive a complex system and not just a ball of rock and metal" [Los Angeles Times], says

project scientist Ralph McNutt. The Messenger probe, whose name is an acronym for the Mercury Surface, Space Environment, Geochemistry and Ranging spacecraft, was only the second spacecraft to investigate Mercury; Mariner 10 swung around the planet in 1974 and 1975. The results of Messenger's first flyby appear in a special section of tomorrow's edition of Science [subscription required], but scientists hope for more revelations in its two subsequent flyby maneuvers.

The second and third passes (to occur on Oct. 6 of this year and in September 2009, respectively) and the spacecraft's year-long orbital phase will likely yield even more information and shed further light on the history of the inner-most planet [SPACE.com].