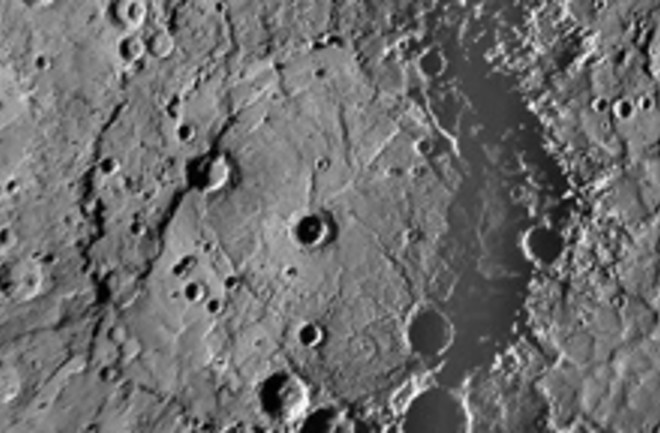 When the Messenger spacecraft swooped low past the planet Mercury on October 6 2008, it gathered up a wealth of data that will have planetary scientists puzzling for years. As researchers sort through findings regarding Mercury's volcanic past, meteor impacts, and the effect of the solar wind on the innermost planet's magnetosphere, one broad conclusion stands out: Mercury isn't just a boring chunk of rock.

Marilyn Lindstrom, a NASA program scientist, said the Messenger findings show that Mercury is "just an amazingly dynamic planet, both in the past and in the present" [Baltimore Sun].

Superficially, Mercury looks a lot like the moon: small, grayish-brown and pockmarked with craters. Some scientists assumed that Mercury’s surface formed the same way the moon’s did, with lighter rocks rising to the surface of a magma ocean and congealing into a brittle crust early on. But the new observations reveal that 40 percent of the surface was formed by volcanoes. “Up until before Messenger’s arrival, we weren’t even sure that volcanism existed on Mercury” [Wired]

, says researcher Brett Denevi. The presence of titanium oxide also suggests that the planet was hot enough in its first 100 million years to be covered in magma oceans. NASA's Messenger also discovered the second largest impact crater on the planet. The 430-mile-wide Rembrandt impact basin is thought to have been formed 3.9 billion years ago at the end of what's known as the Late Heavy Bombardment, a tumultuous time in our solar system's history. The impact that formed the crater broke through the planet's crust, allowing magma to seep out and partially fill the crater.

But researchers cannot yet explain some of the features etched in that volcanic material: a spoke-like pattern of troughs and ridges emanating from the centre of the basin. Troughs and ridges, which are thought to form through very different processes, are not expected to be found lying side by side. So-called "wrinkle ridges" are caused when the crust compresses, while troughs are formed when it is stretched, causing the surface to separate [New Scientist].