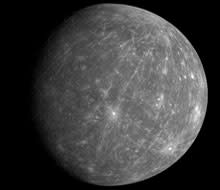 Yesterday, the Messenger space probe swooped down and flew 124 miles from the surface of the innermost planet, Mercury, furiously snapping more than 1,200 pictures of a side of the planet that has never before been seen by a spacecraft. Today, after the NASA probe turned its antenna back towards Earth, it began sending home remarkable photos of Mercury's pockmarked surface.

The second Mercury flyby of Oct. 6 comes after a first flyby on Jan. 14, which looked at a different side of the planet. "When these data have been digested and compared, we will have a global perspective of Mercury for the first time," said [astronomer] Sean Solomon.... Launched in August 2004, MESSENGER - short for MErcury Surface, Space ENvironment, GEochemistry, and Ranging - is the first spacecraft in 33 years to greet Mercury up close since NASA's earlier Mariner 10 mission of the 1970s [SPACE.com].

The first pictures returned from the planet show a surface covered in craters and bright streaks called rays, which consist of material that was flung outward when asteroids crashed into Mercury.

A vast network of rays, like lines of longitude, run from a young crater in the north to just south of a crater called Kuiper, which sits south of the center of the view shown here [Science News].

But scientists have only just begun poring over the images, and more information about what they reveal will be released in the coming months. Messenger didn't swing down close to Mercury's surface just to take top-notch tourist snapshots—it was also using the planet's gravity to decrease its speed and keep it on a course that will eventually bring it into orbit around the planet.

The NASA ship is more than halfway through a five-billion-mile journey that should take it around the sun 15 times and put it into the Mercury's orbit in March 2011.... MESSENGER's major goal is to become the first spacecraft to enter Mercury's orbit. If that happens, it should help scientist understand the composition of Mercury's surface, NASA said [CNN].