Dear Discovery Communications, I have to say, I had high hopes for this year's Shark Week. But we're only one special in and already, shark week has seriously jumped the shark. 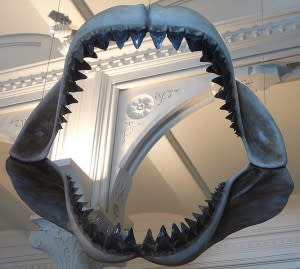 The awe-inspiring jaws of Megalodon at the American Museum of Natural HistoryPhoto from Wikipedia user Spotty11222 I get why you had a special about C. megalodon. What shark inspires more fear and fascination than Megalodon, the Chondrichthyean monster that once dominated our planet's oceans? The shark's name, which translates to "giant tooth", says it all. Their hand-sized dental records are some of the only fossilized evidence we have of these gigantic predators, which lived from ~50 million years ago to around 2 million years ago. Based on their size, scientists have estimated these sharks grew to upwards of 60 feet long with a bite force anywhere between 10 and 18 tons, and from scarred fossils we know they likely dined on the giant whales of their time. This year's Shark Week kick-off special, Megalodon: The Monster Shark That Lives, claimed to provide evidence that these massive beasts are still out there, using scattered anecdotes and scientific testimony to support the assertion. There's only one problem: the entire "documentary" wasn't real. No whale with a giant bite taken out of it has ever washed up here in Hawaii. No fishing vessel went mysteriously missing off of South Africa in April. No one has ever found unfossilized Megalodon teeth. Collin Drake? Doesn't exist. The evidence was faked, the stories fabricated, and the scientists portrayed on it were actors. The idea that Megalodon could still be roaming the ocean is a complete and total myth. 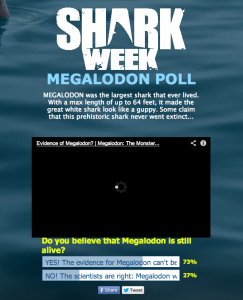 Sobering statistics Here's what I don't get, Discovery: Megalodons were real, incredible, fascinating sharks. There's a ton of actual science about them that is well worth a two hour special. We've discovered their nursery grounds off the coast of Panama, for example. Their bite is thought to be the strongest of all time—strong enough to smash an automobile—beating out even the most monstrous dinosaurs. The real science of these animals should have been more than enough to inspire Discovery Channel viewers. But it's as if you don't care anymore about presenting the truth or reality. You chose, instead, to mislead your viewers with 120 minutes of bullshit. And the sad part is, you are so well trusted by your audience that you actually convinced them: according to your poll, upwards of 70% of your viewing public fell for the ruse and now believes that Megalodon isn't extinct. Megalodon: The Monster Shark That Lives was not just a disservice to your genuinely curious audience. It was a lie. You used your reputation to deceive your viewers, and you didn't even apologize for it. At least the faux Mermaids documentaries on Animal Planet flashed a brief disclaimer explaining that they were false. Megalodon: The Monster Shark That Lives had no such warning. Instead, you did the exact opposite. All you put up was this:

None of the institutions or agencies that appear in the film are affiliated with it in any way, nor have approved its contents. Though certain events and characters in this film have been dramatized, sightings of "Submarine" continue to this day. Megalodon was a real shark. Legends of giant sharks persist all over the world. There is still a debate about what they may be.

While there may be a debate about what "sightings" may be, there is one thing that scientists are sure of: Megalodon is extinct. Part of me is furious with you, Discovery, for doing this. But mostly, I'm just deeply saddened. It's inexplicably depressing that you've gone from "the world's #1 nonfiction media company" to peddling lies and faking stories for ratings. You've compromised your integrity so completely with this special, and that breaks my heart. I loved you, Discovery, ever since I was a child. I grew up watching you. It was partly because of you that I became transfixed by the natural world and pursued a career in science. I once dreamed of having my own Discovery Channel special, following in the footsteps of people like Jeff Corwin. Not anymore. This is inexcusable. You have an obligation to your viewers to hold to your non-fiction claims. You used to expose the beautiful, magical, wonderful sides of the world around us. Now, you just make shit up for profit. It's depressing. It's disgusting. It's wrong. I won't be watching the rest of Shark Week. I simply can't. The last time you disappointed me, I wrote you a letter, and I told you that there was little chance that I could forgive you. I said it felt like you were slipping further and further every day. Sadly, my worst fears have become real. You're just not the channel I grew up with. You've changed. I sincerely hope that you take a little time and reflect on what you've become. Is this really what you want? To abuse the trust of your viewers that you have spent decades building? You say that your mission is "to satisfy curiosity and make a difference in people's lives by providing the highest quality content, services and products that entertain, engage and enlighten." If fraud is the highest quality content you can come up with, then I'm not angry with you—I feel sorry for you. If that is really your goal, you've failed, and you've failed miserably.

Remember when #SharkWeek was about science and biology and learning? — Wil Wheaton (@wilw) August 5, 2013

Update: You don't have to listen to me, Discovery. Read your Facebook wall. This is just a small snippet of the comments your own viewers are posting. Listen to them: 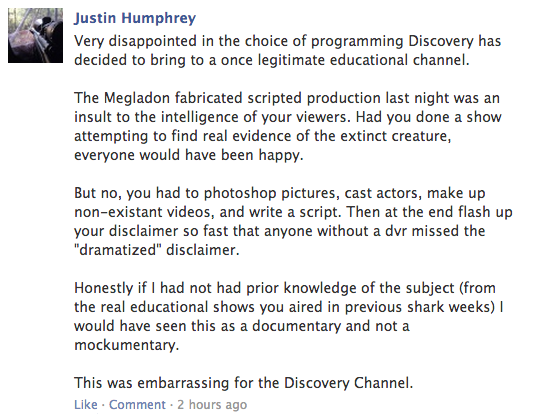