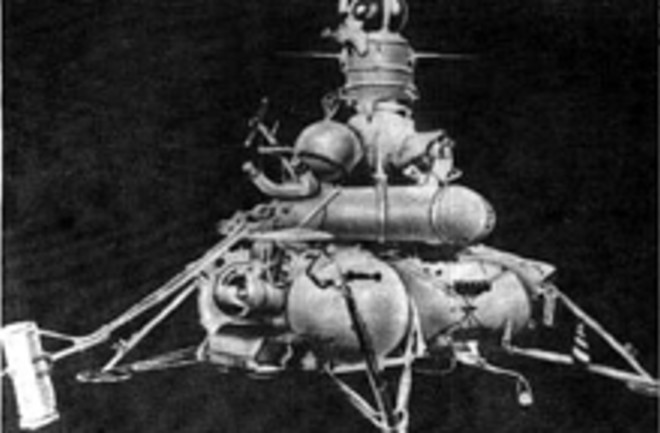 On July 21, 1969, Neil Armstrong and Buzz Aldrin were packing up equipment in their lunar lander, getting ready to blast back to the moon's orbit where command module was waiting to bring the Apollo 11 mission back home. But another dramatic scene was also taking place on the lunar surface: the unmanned Russian probe Luna 15 was crashing to the ground. Now, never-before released recording—from a British control room that was monitoring all the lunar activity—transports the listener back to that tight finale of the moon phase of the space race, 40 years ago. The recordings were made over three days at the Jodrell Bank Observatory in Manchester, where researchers used the Lovell Radio Telescope to listen to transmissions from Apollo 11—and Luna 15. Sir Bernard Lovell, the inventor of the telescope and the founder of Jodrell Bank,

can be heard narrating events with conversation from the Apollo 11 astronauts in the background. Sir Bernard notes a change in the orbit of Luna 15 to take it closer to the US landing site and later reports a rumour from a "well-informed source in Moscow" that the craft is about to land. People in Jodrell's control room can then be heard shouting "it's landing" and "it's going down much too fast" as they track Luna 15's final moments before it crashes [Telegraph].

The Lovell radio telescope had been

pressed into service to monitor Communist progress after Moscow had stolen a march on the Americans with the successful launch of the Sputnik satellite [The Independent].

It was used to track many of the Soviet moon probes, including Luna 15, which was launched just three days before Apollo 11. The unmanned probe's launch was believed to be a last-ditch effort to be the first vessel to bring moon samples back to Earth. But researchers now say

that even if it had landed safely rather than careering out of control into the lunar surface and completed its objectives of recovering soil and rock samples from the Moon, its trajectory meant it would still have been too slow to beat Neil Armstrong and his crew back to Earth and whatever limited propaganda value Moscow may have squeezed out of the situation would have been lost [The Independent].

The newly released tapes end with a touch of British understatement. After Luna 15's crash, a voice is

heard saying: "I say, this has really been drama of the highest order" [Telegraph].

Related Content: DISCOVER: Ten Great Views--and Memories--From the Moon, a photogallery of the Apollo missions DISCOVER: Remembering Apollo asks astronauts to reflect on their big moments 80beats: NASA to Moon: We’re Back. Got Any Ice? 80beats: NASA Robots Aim for Moon; Human Mission May Be in Doubt 80beats: 40 Years Later, Remembering the Boldness of Apollo 8 80beats: Lunar X Prize Competitor Hopes to Send a Rover Back to Tranquility Base Image: Wikimedia Commons