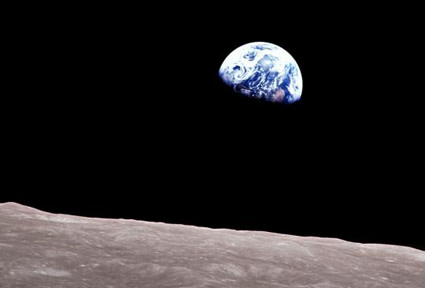 Forty years ago today, a brave crew of NASA astronauts were approaching the moon's orbit for the first time, in a risky mission that lifted the hearts of Americans in a troubled era. Apollo 8 blasted off on the morning of December 21, and eased into the moon's orbit on Christmas Eve, when hundreds of millions of people tuned in to hear the astronauts describe their view and read from the Bible.

To the public, the Apollo 8 mission was an antidote to all the toxic events that had subverted most of 1968, including the assassinations of Martin Luther King Jr. and Robert Kennedy, the eruption of inner-city rioting and the peak of American involvement in the Vietnam War [Chicago Tribune].

Apollo 8 wasn't originally intended to go to the moon; it was scheduled to orbit Earth and test the new lunar landing vehicle. But the vehicle wasn't ready, and the CIA was reporting that the Soviets were on the verge of sending their own manned expedition around the moon, so NASA decided to push ahead.

It was a gutsy, dangerous decision, and not just because flying without a lunar lander meant that Apollo 8's crew - Commander Frank Borman, James Lovell, and Bill Anders - would be stranded without a lifeboat if anything went wrong. Houston still didn't have the software Apollo would need to navigate to the moon. And the huge Saturn V rocket required to launch a spacecraft beyond the Earth's gravity was still being perfected, and had never been used on a manned flight. By today's standards, the risks were unthinkable. Apollo's program director, Chris Kraft, figured the odds of getting the crew home safely were no better than 50-50 [The Boston Globe].

Not only did the Apollo 8 astronauts circle the moon successfully and return home safely, they also gave humanity an unexpected jolt when they turned their cameras back towards Earth and took one of the most remarkable photographs of all time.

Rising above the horizon, over a bleak lunar surface, was the world they had come from, a delicate marble of blue and white, floating alone in the darkness, home to everyone and everything they or anyone had ever known - "the most beautiful, heart-catching sight of my life," Borman later said, "one that sent a torrent of nostalgia, of sheer homesickness, surging through me" [The Boston Globe].

That photograph, known as "Earthrise," is credited with helping to kick-start the environmental movement by giving people a new sense of our fragile planet and its interconnected web of life. For the Christmas Eve broadcast, the astronauts had been instructed to say "something appropriate." The three astronauts decided to take turns reading the first 10 verses of the Old Testament's book of Genesis, which narrates God's creation of heaven and earth, darkness and light, water and sky, and concludes with the declaration that his creation is "good."

In what now seems symbolic of the impact of seeing the whole planet for the first time with human eyes, Borman appeared to cast off the nationalistic cold war fervour surrounding the mission and ended the broadcast saying: "A merry Christmas and God bless all of you, all of you on the good Earth" [The Guardian].