NASA Robots Aim for Moon; Human Mission May Be in Doubt 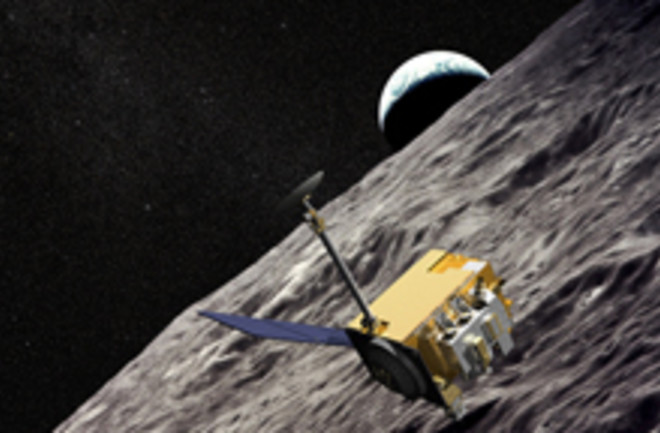 NASA is turning its attention back on a familiar target--the moon--but in service of a unprecedented goal. Two new spacecraft are expected to launch this week on a

robotic mission aimed at finding the best site for Earth's first off-world colony, the centuries-old dream of science fiction writers and utopians.... "We're going to provide NASA with what is needed to get human beings back to the moon and to stay there for an extended duration" [Los Angeles Times]

, explains NASA's Craig Tooley. However, whether such a lunar outpost will ever be built is still an open question. The spacecraft duo comprises an orbiter and a crash-lander; the two spacecraft will take off for the moon aboard a single Atlas V rocket, but once in space they'll separate and take different routes. The Lunar Reconnaissance Orbiter (LRO) will make a four-day journey to the moon's orbit where it will begin mapping the moon's surface, looking for potential moon base sites in polar locations that are bathed in near-constant sunlight (which would be useful for solar panels). The orbiter will also carry

pieces of plastic designed to simulate the density and chemical proportions of human skin and muscle.... The LRO's particle detectors will measure how this plastic interacts with cosmic rays - a form of space radiation made up of particles such as protons that can lead to cancer by damaging DNA [New Scientist].

Meanwhile, the Lunar Crater Observation and Sensing Satellite (LCROSS) will fly off on a long, looping orbit, and will come back around to crash into a crater near the moon's south pole next October.

On its final approach, LCROSS will separate from its Centaur rocket booster. The booster, flying four minutes ahead of the satellite, will plunge to the lunar surface, sending up a plume of rock and dust on impact. The satellite will then fly through the debris cloud, scan it for signs of water and other matter, and relay the data back to Earth. Then it, too, will crash and send up a second cloud of debris to be scanned by telescopes on Earth [Baltimore Sun].

NASA plans to stream a live video feed from LCROSS as the Centaur smashes into the crater below. Researchers are very curious to see if the crash-lander turns up any ice particles. A study done by the 1998 Lunar Prospector mission found high concentrations of hydrogen near the moon's poles, leading researchers to hypothesize that the poles' perpetually shadowed craters harbored ice patches. If water ice is present, it could provide a source of drinking water, hydrogen fuel, and oxygen for future colonists. But further satellite studies have failed to corroborate the previous work. The entire plan for a lunar colony, which came about as a result of President George W. Bush's 2004 Vision for Space Exploration, could be scrapped; the Obama administration recently ordered a review of all NASA's human spaceflight activities. In May, NASA official Christopher Scolese

indicated that he was well aware the long-term plan for humans to colonize other worlds could be in danger. He took note of the fact that "the administration will provide an updated request for exploration activities, as necessary. In the meantime," he said, "NASA is proceeding as planned with current exploration activities, including . . . lunar systems" [Los Angeles Times].