New 'Sponge' Material Is Like a ShamWow for Oil Spills 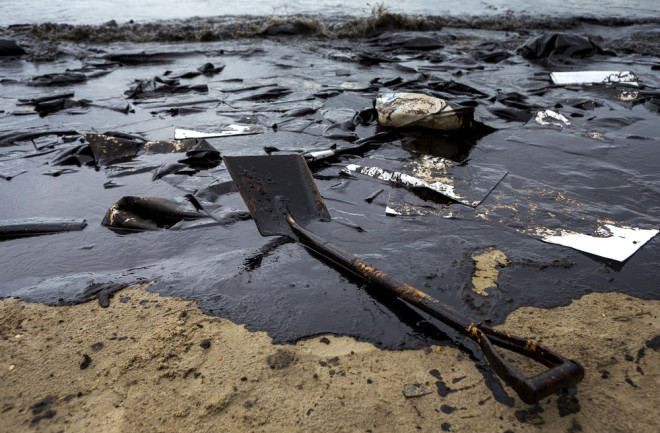 (Credit: jukurae/Shutterstock) When an oil tanker runs aground or a deep-sea well suffers a leak, millions of gallons of oil can flood into the ocean. Once there, oil slicks can be tremendously difficult to contain, and pose risks to ocean-dwellers and coastlines when they wash ashore in waves of sticky sludge.

Normal containment measures involve burning or skimming the thin layer of oil off of the surface, but these aren't perfect and pose their own risks. Materials like straw, sand and clay are also used as sorbents, or oil-absorbing substances, but they often sink to the sea floor and can only be used once—the oil still needs to be disposed of. Researchers from Argonne National Laboratory have come up with a new material that they say gets around these issues. The material, made of a polyimide foam coated with oil-loving silane molecules, can absorb up to 90 times its own weight in oil and can be wrung out and used again and again, researchers say. It's essentially an industrial-size ShamWow. The ease with which oil can be extracted from the foam is what makes this "sponge" so appealing. Oil can be squeezed out and saved for later use, which reduces cleanup costs. Similar methods that rely on oleophilic materials, such as treated sawdust, are effective at soaking up oil, but are usually disposed of by burning, which creates fumes that could harm coastal communities. The material hasn't been put to the test in the open ocean yet, but it performed well in laboratory tests that simulated real-world conditions, according to New Scientist. The researchers made special porous bags to hold the foam and simply dragged them across the surface of water contaminated with oil. They published their work in the Journal of Materials Chemistry A. Still to come are large-scale implementations of the foam in the ocean, where it will face real-world conditions.