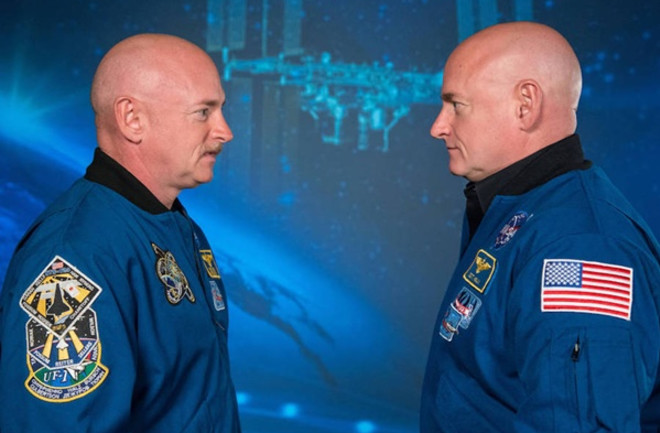 Retired astronaut Mark Kelly (left) poses with his identical twin brother, astronaut Scott Kelly (right). As part of NASA's Twins Study, Scott took a long trip to space, while Mark remained on Earth. Researchers then monitored how their bodies reacted to their differing environments. (Credit: NASA) Brothers compete. So in 2016, when astronaut Scott Kelly returned to Earth after spending a year in space, it must have really annoyed his identical twin brother — retired astronaut Mark Kelly — that Scott was two inches taller than when he left. However, Scott's temporary increase in height was not the only thing that changed during his trip. As part of NASA's Twins Study, while Scott was in space, Mark went about his daily life on Earth. Over the course of the year-long mission, researchers tracked changes in both brothers' biological markers to pinpoint any variances. Because the twins share the same genetic code, researchers reasoned that any observed differences could tentatively — though not definitively — be linked to Scott's time aboard the International Space Station (ISS). This allowed them to take advantage of a unique opportunity and explore how an extended stay in space may impact the human body. Based on their results, which were published last week in the journal Science, spaceflight can definitely trigger changes in the human body. But the vast majority of these changes disappear within just a few short months of returning to Earth. Most notably, the researchers found that living in a microgravity environment can: damage DNA; impact the way thousands of individual genes are expressed; increase the length of telomeres (the shielding caps that protect the ends of our chromosomes); thicken artery walls; modify the microbiome; and increase inflammation — just to name a few. "This is the dawn of human genomics in space," said Andrew Feinberg, a distinguished professor at Johns Hopkins University and one of the lead investigators for the Twins Study, in a press release. "We developed the methods for doing these types of human genomic studies, and we should be doing more research to draw conclusions about what happens to humans in space."

A Smattering of Studies

The Twins Study is actually composed of 10 distinct projects all wrapped into one. The individual investigations focus on how long-term spaceflight can impact different aspects of the human body, ranging from genetic expression to cardiovascular health to immune system response and more. To carry out the study, researchers performed numerous tests and collected many samples from both twins, beginning six months before Scott's flight and ending nine months after he landed. While in orbit, Scott was responsible for collecting his own samples — which included blood, urine and fecal matter.

This graphic illustrates how the individual Twins Study projects were integrated into the single summary paper that was just released. Later this year, individual projects will publish several companion papers delving into the specifics of each study. (Credit: NASA)

One of the most intriguing results from the Twins Study came from investigating how gene expression (or epigenetics) changed over the duration of the mission. Led by Chris Mason of Weill Cornell Medicine, researchers carried out whole-genome sequencing to identify chemical changes that occurred in the twins' DNA and RNA. Though both Kellys were expected to experience epigenetic changes over the course of the study, the sheer number of transformations still took researchers by surprise. "Some of the most exciting things that we've seen from looking at gene expression in space is that we really see an explosion, like fireworks taking off, as soon as the human body gets into space," Mason said in a press release when the preliminary results first came out. "With this study, we've seen thousands and thousands of genes change how they are turned on and turned off. This happens as soon as an astronaut gets into space, and some of the activity persists temporarily upon return to Earth." Overall, when Scott ventured to space, his body activated many previously dormant genes. Primarily, it turned on genes related to telomere growth, collagen production, immune system response, and DNA repair. And though such changes started soon after Scott got into space, they dramatically ramped up about halfway through his stay. "Gene expression changed dramatically," Mason said in a press release. "In the last six months of the mission, there were six times more changes in gene expression than in the first half of the mission." However, more than 90 percent of Scott's genes were again expressing themselves normally within six months of his return. The researchers point out that Earth-bound Mark also experienced a significant number of epigenetic changes. "The amount of difference that we saw in Scott was within the range of the fluctuation that we see in Mark," said Andy Feinberg of Johns Hopkins University in a press conference Tuesday, "so we don't see that as pathological." "The Twins Study has been an important step toward understanding epigenetics and gene expression in human spaceflight," said J.D. Polk, NASA's Chief Health and Medical Officer, in a statement.

Another important aspect of the Twins Study focused on how spaceflight altered the length of Scott's telomeres, which are the protective caps on the ends of chromosomes that prevent DNA strands from degrading as we age. Led by professor Susan Bailey of Colorado State University, this study monitored the length of each twins' telomeres before, during, and after Scott's stay aboard the space station. Telomeres "can serve as a biomarker of accelerated aging or some of the associated health risks like cardiovascular disease or cancer," Bailey said during the press conference. "We imagined going into the study that the unique kinds of stresses and extreme environmental exposures like space radiation and microgravity, all of these things would act to accelerate telomere loss." [embed]https://www.youtube.com/watch?v=Dbq-9faXThA[/embed] Unexpectedly, Bailey and her team found the length of Scott's telomeres did not shrink while he was in space. Instead, they significantly increased in length. However, within just two days of Scott's return to Earth, his telomeres drastically shortened again. Though Scott's telomeres are now, on average, about the same length as they were preflight, Bailey notes that Scott currently has more very short telomeres than he did at the start of the project, which could indicate his time in space negatively affected his telomeres over the long-term. Meanwhile, Mark's telomeres remained about the same throughout the study. "For us Earthlings," Bailey explained in a press release, "We all worry about getting older, and everyone wants to avoid cardiovascular disease and cancer. If we can figure out what's going on, what's causing these changes in telomere length, perhaps we could slow it down. That's something that would be a benefit to everybody." To do this, Bailey is already planning to carry out further telomere research as part of NASA's One-Year Mission Project, which is currently under development. In the project, Bailey will study 10 astronauts on full-year missions, 10 astronauts on half-year missions, and 10 more on short missions of only two to three months. Unlike the Twins Study, which allowed Mark to go about his normal life, the One-Year Mission project will house control subjects in isolation during each astronaut's mission. According to Bailey, "We're trying to determine if it is indeed something specific about space flight that is causing the changes we've seen."

Scott and Mark Kelly (left and right, respectively) are identical twins, which made them valuable subjects for study. During Scott's time in space, his telomeres grew longer. However, upon his return, they shortened again in less than 48 hours. (Credit: NASA)

Increased gene expression and lengthened telomeres were far from the only changes observed in the Twins Study. Researchers also investigated a host of other physical and mental indicators of overall health. Stuart Lee of KBRWyle at NASA's Cardiovascular and Vision Lab looked at how spaceflight impacts the structure and effectiveness of arteries. By imaging the twins' arteries with ultrasound, as well as analyzing biomarkers in their blood and urine samples, his team found that the wall of Scott's carotid artery — which supplies blood to the brain — grew thicker while in space. Meanwhile, Mark's carotid artery wall did not grow thicker. According to Lee, a thicker carotid artery wall is associated with an increased 10-year risk of both cardiovascular disease and stroke. During his time in space, Scott's microbiome — the bacteria in his gut — drastically changed. Led by Fred Turek of Northwestern University, researchers monitored the complex community of microorganisms living inside both Mark and Scott throughout the entirety of the study. Though the twins expectedly had very different microbiomes throughout the duration of the mission, researchers did find that Scott's microbiome changed once he got into space, but then it returned to its preflight composition once he got back to Earth. Because the researchers point out this could be due to his diet of freeze-dried, prepackaged food while in flight, moving forward, it may make sense to customize astronaut diets to help reduce detrimental bacteria while letting beneficial ones thrive. Another study, led by Mike Snyder of Stanford University, tracked how spaceflight affected inflammation in the human body by monitoring fats and proteins in the twins' blood. The researchers showed that while Scott's body was in microgravity, it was more prone to inflammation than his brother's. However, the researchers note Scott's increased inflammatory response could very well be a normal response to a stressful situation, which spaceflight surely is. Emmanuel Mignot, also from Stanford University, tested Scott's immune response by giving him the flu vaccine on three separate occasions: first on Earth, then in space, and once again upon his return. Each time, Scott's body reacted as you would expect under normal conditions. And considering a sickness spreading through the crew of a long-duration mission to the Moon or beyond would pose a significant problem, the fact that Scott's body responded appropriately to a vaccine is quite encouraging. Although many of the Twins Study's projects focused on physical changes to the human body that occur during spaceflight, researchers also monitored the brothers' mental abilities throughout the study. Mathias Basner of the University of Pennsylvania had the twins take 10 different tests — exploring things like alertness and emotional awareness — multiple times before, during, and after the mission. Though both Mark and Scott maintained high-levels of performance before and during the mission, the researchers found a slight drop in Scott's performance upon his return to Earth. However, the researchers think this post-flight decline may simply be due to a busy schedule and readjusting to Earth's gravity.

NASA's Twins Study is hardly a perfect study. "I want to emphasize this — we're only studying a [sample size] of one," said Feinberg. "In other words, there's just one twin pair here. And we're not corroborating the results in this study by looking at other astronauts." At least not yet. With plans for NASA's One-Year Mission project already in the works, researchers may soon compile an exponentially larger dataset that will help them investigate spaceflight-induced changes to the human body like never before. By using the Twins Study as a jumping-off point, future research is sure to explore new treatments and preventative measures that may help alleviate some of the negative symptoms observed in space-bound astronauts. "Thanks to the twin brothers and a cadre of investigators who worked tirelessly together," said Polk, "the valuable data gathered from the Twins Study has helped inform the need for personalized medicine and its role in keeping astronauts healthy during deep space exploration, as NASA goes forward to the Moon and journeys onward to Mars."