NASA's Lanky Ares Rocket Gets Ready for a Test Flight 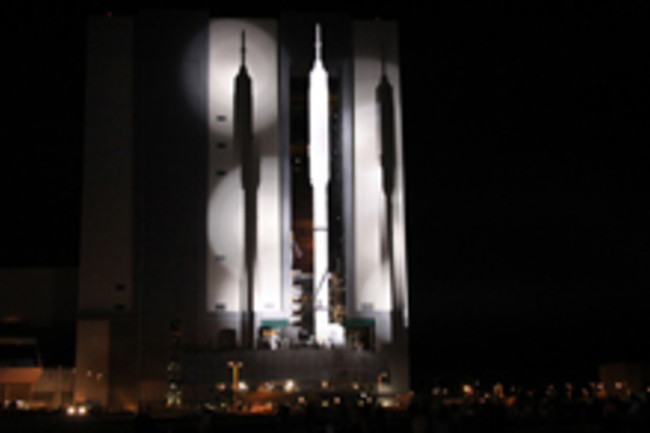 A prototype of the rocket that may blast astronauts into space once the space shuttle is finally retired will get a high-profile test flight next week, and this morning the tall, skinny rocket was rolled onto the launch pad in Florida. While the experimental Ares I-X rocket certainly looked grand as it was rolled slowly from the assembly building to the launch pad (a four-mile trip that took seven hours), its future is far from certain.

A White House panel has been considering cancelling Ares I in favour of a commercial launcher. Its final report is expected this week [New Scientist].

"It's a tall rocket; it's been over three decades since anyone has built a rocket this tall. That was the Saturn V," explained Trent Smith, the vehicle processing engineer for the Ares 1-X. "We have over 700 sensors on this rocket; and the whole point of Ares 1-X is to understand how does a rocket this shape, this weight, this tall actually fly" [BBC News].

NASA's Ares I rocket is a two-stage launcher made up of a giant five-segment solid rocket booster first stage (similar to the four-segment versions used on the space shuttle) and a liquid-fueled second stage. Completing the rocket is the Orion crew capsule and a launch abort system tower at the top. The rocket is tall and slender, and is thicker at the top than on the bottom [SPACE.com].

But the prototype Ares I-X that will soon be tested will have dummy components in place of the liquid-fuel stage, the crew capsule, and the abort system. It will also have solid fuel only in four of the first stage's segments. The debut test flight is currently scheduled to take place on the morning of October 27. This unmanned flight will only bring the rocket to a height of about 150,000 feet before it turns downward and plummets into the Atlantic Ocean. But the short flight will give engineers plenty of information.

Among other things, designers want to see how well the flight-control system works during the rocket’s climb. They want to test the parachute-based recovery system for the reusable first stage. And they want to see how the craft shakes, rattles, and rolls when the first and second stages separate [The Christian Science Monitor].