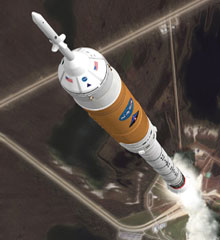 A new technical problem with NASA's next generation Ares I rocket is causing headaches for the space agency, and could leave engineers scrambling to keep the project on time and on budget. Rumors are flying that this new glitch, in addition to other technical issues that have cropped up in the past few years, may cause the agency to abandon the design altogether. A former Florida congressman and current lobbyist told state officials

that NASA’s next rocket is “on the chopping block” and that a new administration may abandon the Ares I as successor to the space shuttle. The next president may look instead to use military rockets to launch NASA astronauts [Orlando Sentinel blog].

After the space shuttles retire, NASA expects to complete work on the Ares I rocket and its matching Orion crew capsule, with hopes of resuming manned flights by 2015. But the Ares I has already been criticized for lacking lift power, and then for a vibration problem that could dramatically shake up astronauts. The latest concern arises from computer models showing that the Ares I could crash into the launch tower during liftoff.

The issue is known as "liftoff drift." Ignition of the rocket's solid-fuel motor makes it "jump" sideways on the pad, and a southeast breeze stronger than 12.7 mph would be enough to push the 309-foot-tall ship into its launch tower. Worst case, the impact would destroy the rocket. But even if that doesn't happen, flames from the rocket would scorch the tower, leading to huge repair costs.... "I get the impression that things are quickly going from bad to worse to unrecoverable" [Orlando Sentinel],

said one NASA contractor who requested anonymity. NASA officials have steadfastly defended the program against its critics.

"I think we are beset by quite a number of commentators who really don't understand what's involved in an engineering development programme," agency chief Mike Griffin said ... earlier this month. "The development of our Ares and Orion crew vehicles, despite what you read on internet blogs, is actually going quite well" [New Scientist].

DC-X: The NASA Rocket That Inspired SpaceX and Blue Origin 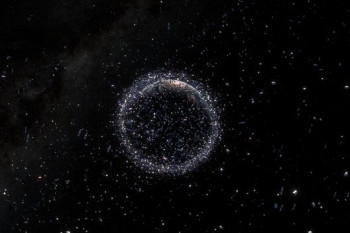 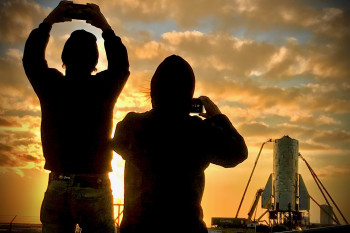