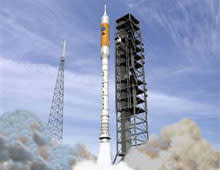 Yesterday, NASA announced its solution for the potentially dangerous vibrations that have plagued the rocket that is expected to boost NASA's next generation spacecraft, the Orion, to the moon and maybe beyond. The Ares I rocket is part of the Constellation program that calls for a replacement for the space shuttle to be ready by 2015, and a manned mission to the moon by 2020. The fix involves two devices that will act like giant springs, which NASA engineers say will act like the shock absorbers on a car:

The high-tech absorbers should limit the violent shaking, called “thrust oscillation,” down to a level that NASA officials compared to driving over the rumble strips of a highway [Orlando Sentinel].

The first spring will sit between the first-stage solid fuel rocket booster and the second-stage liquid fuel booster. The second device

will consist of a ring of 16 cylinders containing 100-pound weights around the inside of the skirt-like base of the rocket's first stage. Sensors will move these weights so they actively cancel out the vibration [New Scientist].

For close to a year, NASA engineers working on the new Ares 1 rocket and Orion crew capsule have been wrestling with the problem of heavy vibrations from the massive rocket engines about two minutes after launch. If the vibrations are not dampened, it could potentially harm the crew or make it too difficult for them to operate for a few seconds [AP].

NASA has received bad press for its handling of the design flaw; in April the Government Accountability Office included the problem in a critical review of the Constellation program. But NASA engineers say they were simply proceeding cautiously as they tried to solve a problem they hadn't encountered before.

The Space Shuttle is not sensitive to the vibrations of its boosters -- the white rockets strapped to the orange tank, presumably because it is not sitting directly on top of them. But the new Orion crew capsule will sit directly atop the Ares I rocket, and vibrations from the five-segment rocket are expected to be worse than with the four-segment Shuttle booster [Wired News].

DISCOVER reports on NASA's ambitious plans for the moon in "The Space Race for the New Millenium," and reveals NASA administrator Michael Griffin's hopes to push on to Mars in "The Future of NASA." Image: NASA