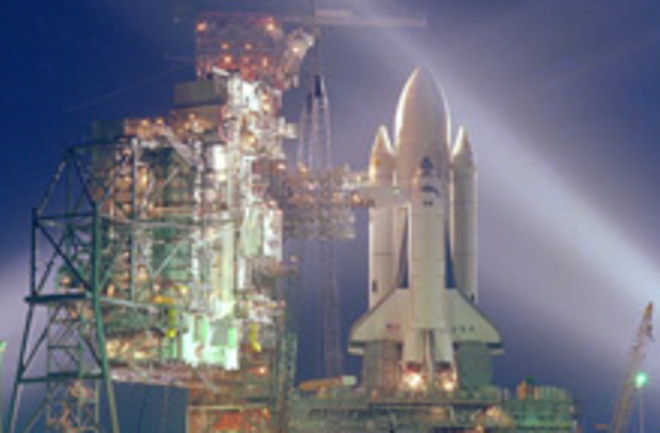 While NASA's central mission is the same as it always was--to send astronauts up, up, and away!--the details of how it will send bold explorers into the space frontier are suddenly, well, up in the air. After months of signaling displeasure with NASA's operations, the Obama administration has ordered a 90-day review of the human space flight program.

In a letter to NASA Acting Administrator Christopher Scolese, the president's science adviser, John Holdren, wrote that "it would be only prudent" to review NASA's human space flight program given the magnitude of its ambitions and "the significant investment of both funds and scientific capital" [Washington Post].

The crux of the matter is the Constellation program, which aims to replace the aging space shuttles with the newly designed Ares rockets and Orion crew capsule. But during the

past several months, watchdog agencies have questioned whether NASA can deliver the Constellation program on time and within budget. Its estimated costs through 2015 have risen from $28 billion in 2006 to more than $40 billion today, and engineers still are wrestling with design flaws that would cause Ares I to shake violently during ascent and also possibly drift into its launch tower [Orlando Sentinel].

Back in December, Obama's transition team reportedly asked NASA officials if military rockets used to launch satellites could be reconfigured to boost astronauts to the International Space Station and on to the moon. The announcement of the review coincided with the announcement of the proposed NASA budget.

All told, Obama is requesting roughly $18.7 billion for NASA for 2010, a 5 percent increase that includes a roughly $150 million budget hike for the Exploration Mission Directorate - the part of NASA in charge of building the Ares I rocket and Orion Crew Exploration Vehicle [SPACE.com].

NASA officials say that work will continue on these projects while the 90-day review takes place. The proposed budget also increased funding for studies of the earth's changing climate, and

backtracks from an earlier decision by the Obama administration to end all shuttle flights in 2010. After heavy lobbying from Florida lawmakers, the White House agreed to complete the nine launches left on the schedule — even if a few slip into 2011 [Orlando Sentinel].