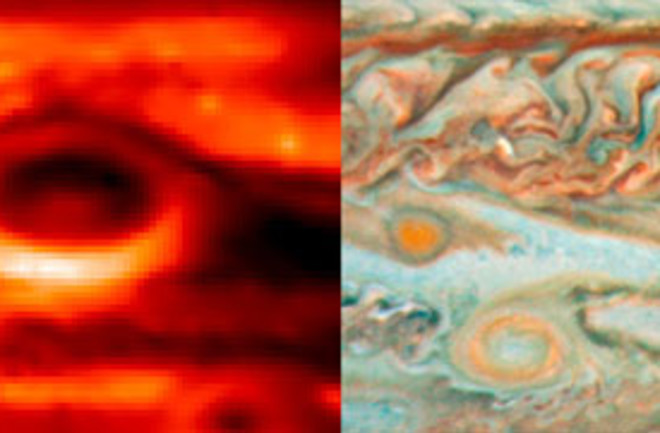 Here's one benefit of a storm so ferocious that it rages on for centuries--scientists have plenty of time to observe it, and to wait for technology to improve so they can get an even better look. The solar system's biggest storm swirls on the giant gas planet Jupiter; it's a tempest that goes by the name the Great Red Spot. Now, for the first time, scientists have constructed a detailed interior weather map of the giant storm system using thermal images from the European Southern Observatory's Very Large Telescope and other powerful ground telescopes. Peering into the Great Red Spot, scientists found that there were surprising weather and temperature variations within the spot and that the dark red area in the spot's center is actually a warm patch in the storm. The observations are detailed in the journal

, and give researchers a better understanding of circulation patterns within this Jovian storm. Says Glenn Orton, the Jet Propulsion Laboratory astronomer who led the study:

“We once thought the Great Red Spot was a plain old oval without much structure, but these new results show that it is, in fact, extremely complicated” [Wired].

For centuries, astronomers have observed Jupiter's Red Spot, which is as wide as three Earths lined up side-by-side. Orton says that if you had seen the spot in the 17th century, when it was first discovered, you would have been "tempted to call it the great red sausage," adding that it has slowly been shrinking in size since then. It is only in recent decades that scientists have been able to understand weather patterns around the spot, and exactly what was happening inside the storm was largely mysterious until now. The new images have revealed that the red in the Red Spot is actually a warm patch. "Warm" in this case translates to -250 degrees Fahrenheit while cold is an even frostier -256 degrees F

This temperature difference might not seem like a lot, but it is enough to allow the storm circulation, usually counter-clockwise, to shift to a weak clockwise circulation in the very middle of the storm [ANI].

This slight temperature difference also alters wind velocity and cloud formation in other belts. Scientists are also trying to figure why the spot is red in color. Orton thinks that answer may lie in what happened with another Jovian storm--the Oval BA. The Oval BA started off as a white spot and gradually turned red as it increased in power, leading Orton to theorize that

it presumably put down deeper roots in Jupiter's atmosphere, bringing up more sulfur-bearing material from the lower levels. When that material rose to the top of the clouds and was exposed to the sun's ultraviolet radiation, a chemical reaction could have brought out the reddish color [MSNBC].