The massive planet passed behind the sun and arrived with a brand new decoration. 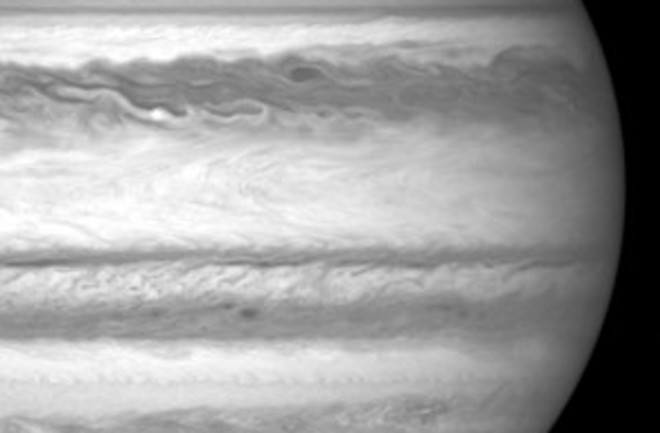 When Jupiter emerged from its annual pass behind the sun last March, amateur astronomers saw a brand-new blotch of vermilion on the solar system’s largest planet, just west of the Great Red Spot, Jupiter’s signature storm. NASA’s Hubble Space Telescope and the Keck II in Hawaii were soon trained on the so-called baby red spot, which seemed destined to collide with the big one. “They were at the same latitude, and they were moving toward each other,” says astronomer Imke de Pater of the University of California at Berkeley.

Planetary scientists study Jupiter’s red spots because their formation and fate help characterize the turbulence that roils the planet’s atmosphere. Red storms are Jupiter’s most violent; their churning rises five miles above the stable cloud bed and dredges up material from deep in the atmosphere. The Great Red Spot, the most powerful storm in the solar system, commonly devours lesser storms. “In its cloud band, the Great Red Spot is the Lord Voldemort of Jupiter,” says Philip Marcus, who studies fluid dynamics at UC Berkeley. “Sooner or later, it’s going to get you.”

The little red spot’s end came sooner. The spots met on July 1, and by July 7 the smaller storm had swung around to the opposite side of the Great Red Spot intact. It seemed to have survived, but three days later no sign of it remained. Now Marcus and his colleagues are analyzing its brief existence. “We don’t know exactly where the spot came from,” Marcus says. “Its birth may be more interesting than its death.”