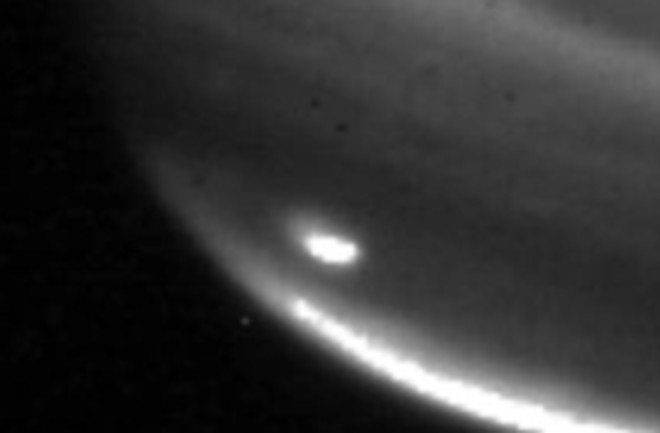 Jupiter is sporting a new, Earth-sized scar near its south pole, and NASA has confirmed that the gas giant was thumped by a massive impact over the past few days. The discovery was made Sunday night by a Australian computer programmer who uses his spare time to stargaze with his backyard telescope, and today NASA declared that the dark spot is definitely not a weather system, and is indeed evidence of a collision. It's not yet known exactly what smacked into Jupiter; astronomers say it could have been an unknown comet, or a stray piece of ice.

This is only the second time such an impact has been observed. The first was almost exactly 15 years ago, when more than 20 fragments of comet Shoemaker-Levy 9 collided with the gas giant. "This has all the hallmarks of an impact event, very similar to Shoemaker-Levy 9," said Leigh Fletcher, an astronomer at NASA's Jet Propulsion Lab.... "We're all extremely excited" [New Scientist].

The discovery was a lucky break, says amateur astronomer Anthony Wesley, who first spotted the crash site. He was observing Jupiter until about midnight on Sunday, but then ducked inside to watch a bit of golf and cricket. When he came back outside half an hour later, a dark spot had rotated into view.

, Wesley says. Wesley alerted professional astronomers across the world, and a group of NASA astronomers set to work at the Infrared Telescope Facility at the summit of Mauna Kea, Hawaii. What they saw was something that bore no resemblence to any weather system ever seen on Jupiter. The researchers drew their conclusions from

a near-infrared image of the upper atmosphere above the impact site. An impact would make a splash like a stone thrown into a pool, scattering material in the atmosphere upwards. This material would then reflect sunlight, appearing as a bright spot at near-infrared wavelengths. And that's exactly what the team saw. "Our first image showed a really bright object right where that black scar was, and immediately we knew this was an impact" [New Scientist]