It’s Official: There Is Ice on Mars 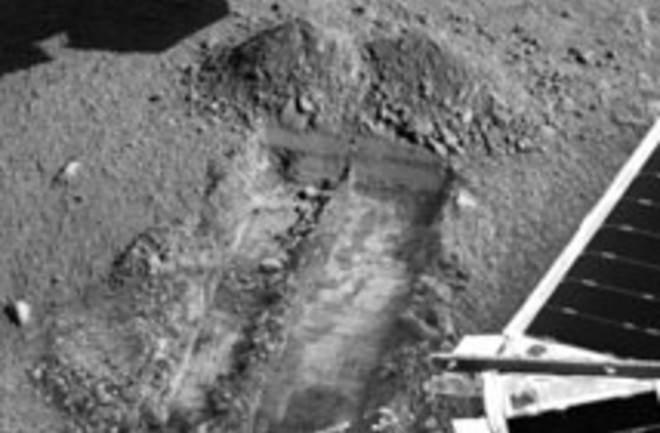 Scientists were pretty sure that their latest robot explorer, the Phoenix Lander, would discover water ice on Mars, but there was still cause for rejoicing when the Phoenix's latest snapshots confirmed that they'd found it.

[T]o actually see the ice was “tremendously exciting,” [principle investigator Peter] Smith said. “One of the biggest fears I’ve had on the mission is that we’d dig and dig and never find anything” [The New York Times].

The breakthough came over the course of the week. On Sunday, the Phoenix used its robotic arm to enlarge a trench it had been digging in the Martian soil, and snapped pictures of small white chunks at the bottom of the pit. NASA scientists said the white material could be either ice or a form of salt, and that time would tell. Yesterday, when the Phoenix took new photos of the same trench, scientists saw that many of the white chunks had vanished. That means the chunks were small pieces of ice that vaporized upon being exposed to the air, in a phase-change called sublimation. Salt could not undergo such a transformation, NASA says.

NASA's motto for its Mars mission is "follow the water," and the agency set the Phoenix down near the Martian north pole because evidence indicated that the lander would have the best chance of finding water ice there. In 2002, the orbiting Mars Odyssey detected hints of a vast store of ice below the surface of Mars' polar regions. The arctic terrain where Phoenix touched down has polygon shapes in the ground similar to those found in Earth's permafrost regions. The patterns on Earth are caused by seasonal expansion and shrinking of underground ice [AP].

The next step is to heat a sample containing ice and dirt in one of the Phoenix's tiny ovens, and to look for chemical traces indicating whether or not liquid water ever existed on the planet. Mars is currently far too cold for liquid water, but scientists think that the planet's axis could have shifted over the past 10 million years, which could have tipped the north pole closer to the sun and warmed it up. If liquid water ever existed on Mars, there's a greater possibility that primitive life could have evolved.

Meanwhile, digging in a different trench on Thursday, the scoop at the end of the Phoenix’s robotic arm hit a hard surface — possibly a hard icy layer — that did not yield after three efforts. The hard layer is at the same depth as the white material in the first trench. The robotic arm has a scraper and, if necessary, a small drill to break off pieces of the hard material for analysis in one of the ovens, which would determine the chemical composition [The New York Times].