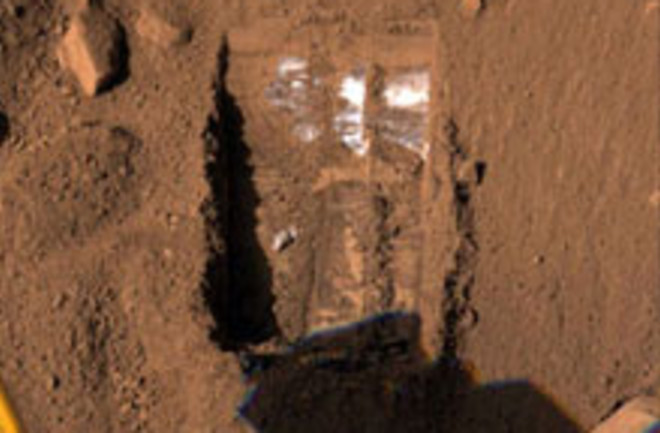 The Phoenix Lander's mission on Mars, and its whole reason for existence, is to search for water ice on our neighbor planet. NASA landed its robot explorer near Mars' north pole, and scientists were delighted by a photograph of the surface beneath the Phoenix's feet that showed a white substance beneath the dirt. But the Phoenix came up empty while looking for ice in its first scoop of soil last week, leading NASA scientists to ruefully predict that they'll find the elusive ice in the next scoop. The Phoenix analyzed the sample in its Thermal and Evolved Gas Analyzer (TEGA), first cooking it to 95 degrees Fahrenheit, then boosting the temperature to 350 degrees. The instrument analyzed the gases given off by the warming sample, but found no water vapor. The circumstances surrounding this first test were not ideal, which could have skewed results. The Phoenix's robotic arm deposited the soil sample in the oven's screened opening as planned, but the soil was apparently too clumpy to make it through the screen.

[T]he crusty sample sat stubbornly on a protective screen for several days before slipping into the oven below, giving whatever ice the dirt might have contained plenty of time to sublimate away [Scientific American].

Researchers are gung-ho about ice because its presence could indicate that liquid water once existed on Mars during a warmer epoch in the planet's history, which would have made it more possible for primitive life to evolve. (Mars enthusiasts also point out that the presence of large amounts of water ice would make the planet a better candidate for eventual human settlement.) NASA is still very optimistic that the Phoenix will succeed at its mission, based largely on data gathered by the orbiting Mars Odyssey in 2002. Using a gamma ray spectrometer, which detects the various signatures of chemical elements, researchers discovered large amounts of hydrogen in the topsoil near the north pole, and guessed that it indicated ice.

The data from the gamma ray instrument rule out the possibility that the hard white substance is a chloride based salt (like sodium chloride, NaCl or table salt) though it is possible it could be a sulfate based salt [Wired News].

The white substance that the Phoenix first spotted underneath its feet has turned up again in new pictures of the Phoenix's digging area, and scientists are hoping that the next scoop will yield pay dirt.

The latest images of the trench from which the soil was taken show light-toned material that the scientists think could be ice protruding from the trench's side.... "This could be the tip of the iceberg," Arvidson said [Los Angeles Times].