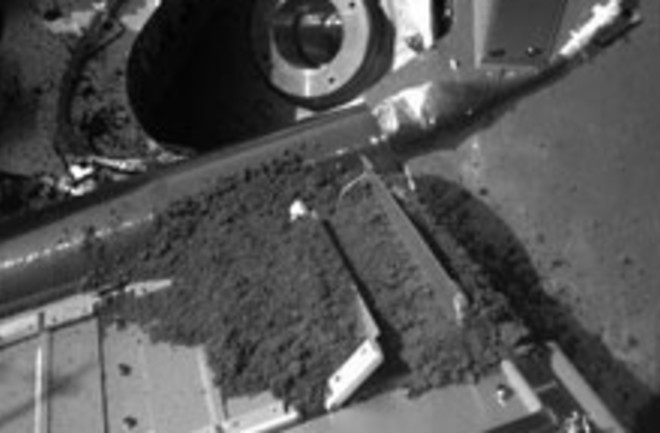 Almost two weeks after NASA's latest robotic explorer made a picture-perfect landing on Mars, it was ready to get down to work. The Phoenix's main mission is to scoop up samples of dirt and ice and look for evidence of whether liquid water ever existed on the planet, and whether the conditions may have ever existed to support primitive life. By Friday it had unpacked its 8-foot robotic arm and practiced scraping dirt from the polar plain, and it was geared up for its first real tests. But when the Phoenix carried its first scoop of dirt to a tiny oven where the dirt would be analyzed, something went wrong. Photos show that the robotic arm did deposit a scoop of dirt in the proper screened opening, but sensors in the oven reported that no particles had made it through the screen and into the oven. NASA engineers scrambled for the rest of the weekend to figure out what might have gone wrong with the oven, which is called a Thermal and Evolved-Gas Analyzer, or TEGA. The TEGA is meant to analyze the water and mineral content of soil samples by heating them slowly, and observing the gases that are released.

The TEGA features a screened opening that prevents large particles from clogging it. Only those thinner than 1 mm (0.04 of an inch) can pass through, and an infrared beam verifies whether they have entered the instrument. The beam has not yet confirmed any activity and researchers are not sure why, NASA said in a statement [Reuters].

The problem may not be with the lander, NASA said, but rather with the soil sample.

"I think it's the cloddiness of the soil and not having enough fine granular material," said Ray Arvidson, of Washington University in St Louis. "In the future, we may prepare the soil by pushing down on the surface with the arm before scooping up the material to break it up, then sprinkle a smaller amount over the door," he explained [BBC News].

On Sunday, NASA planned to use mechanical shakers on the TEGA to try to break apart the dirt clods and send some particles down into the oven. The initial failure is a disappointment to the Phoenix's earth-bound team, who had hoped to have the first analysis of the Martian soil completed by the end of the week, but it's not a devastating development.

Even if this oven turns out to be unusable, the seven other ovens would be available for the mission's primary experiments. In the meantime, scientists will turn their attention to using the arm's backhoe-like arm to take close-up photos of the surface and do additional digging [AP].