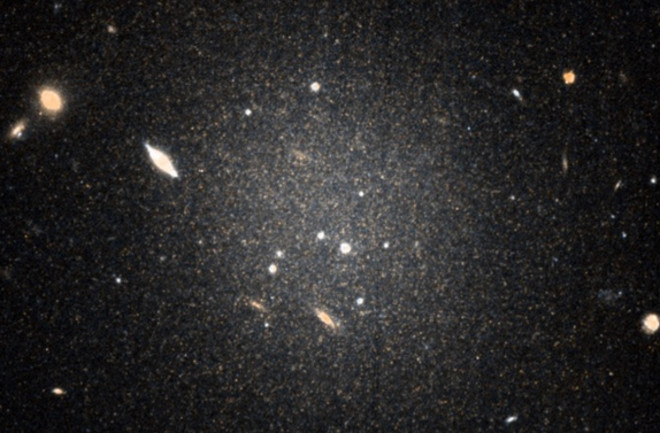 Astronomers have all but confirmed the universe has at least one galaxy that’s woefully deficient in dark matter. The new finding not only indicates that galaxies really can exist without dark matter, but also raises fundamental questions about how such oddball galaxies form in the first place.

The research, posted October 16 on the preprint site arXiv, used Hubble’s keen eye to take new, deep images of the ghostly galaxy NGC 1052-DF4 (or DF4 for short). Equipped with fresh observations, the researchers identified the bizarre galaxy’s brightest red giant stars (called the Tip of the Red Giant Branch, or TRGB). Because TRGB stars all shine with the same true brightness when viewed in infrared, the only thing that should affect how bright they appear is their distance.

So, by identifying the galaxy’s TRGB and using that to determine DF4’s distance, the new data essentially confirms the galaxy is located some 61 million light-years away. And according to the researchers, this essentially debunks other studies that claim DF4 is much closer and therefore contains a normal amount of dark matter.

“I think this is definitive,” co-author Pieter van Dokkum of Yale University told Astronomy via email.

The Debate Over Galaxies Without Dark Matter

Over the last few years, there’s been a controversy brewing in the astronomical community. In 2018, van Dokkum and his team stumbled upon a ghostly galaxy, nicknamed DF2, that seemed to lack any significant amount of dark matter. And because dark matter is thought to account for about 85 percent of all matter in the universe, the apparent discovery of the first galaxy without the elusive substance raised a lot of eyebrows.

One such skeptic was Ignacio Trujillo of the Instituto de Astrofisica de Canarias. Intrigued by the extraordinary claim of a galaxy without dark matter, Trujillo and his team quickly carried out their own analysis of DF2. Based on a variety of methods, Trujillo’s team determined that DF2 was actually much closer than van Dokkum’s team claimed — some 42 million light-years away rather than 61 million light-years. This, Trujillo argued in a 2019 study, meant that DF2 wasn’t as strange as initially thought, and instead hides about as much dark matter as you would expect from your average, run-of-the-mill galaxy.

But then, just six days later, van Dokkum’s team published yet another study identifying a second galaxy, named DF4, that was located about the same distance away as DF2 and likewise lacked dark matter. Yet again, Trujillo and his colleagues went about calculating their own distance to DF4. Based on the Hubble data available at the time, the non-dark-matter camp identified what they thought was DF4’s TRGB. But according to the newly presented Hubble data — which picked up many more, much fainters stars — Trujillo’s team may have misidentified the TRGB.

“In the new data, there really is no ambiguity,” says study author Shany Danieli of Yale University. “We think the new data really rule out the [the closer distance derived by Trujillo’s group]. The TRGB is generally seen as definitive, as its physics is well understood.”

What Does a Galaxy Without Dark Matter Mean?

If these latest results hold up to the scrutiny that’s likely to come, then discovering the first (and possibly second) galaxy without dark matter would fundamentally change our understanding of how we think galaxies form and evolve.

“[DF4 and DF2] point to an alternative channel for building galaxies — and they even raise the question whether we understand what a galaxy is,” van Dokkum says. Right now, he says, we think that galaxies begin with dark matter, which is how they’re able to gravitationally attract the massive amounts of gas and dust needed to kick-start star formation.

“The thing is, we have no idea how star formation would proceed in the absence of dark matter,” van Dokkum says. “All we can say is that there must have been very dense gas early on in their history,” otherwise, the galaxies couldn’t create new stars.

But is this latest distance determination to DF4 really robust enough to start exploring the implications of finding a galaxy without dark matter?

“Yes, that’s our hope. We’d love to move to discuss what these galaxies mean, rather than whether our measurements were correct,” Danieli says.

“That said,” she added, “we fully agree with everyone that ‘extraordinary claims require extraordinary evidence”‘