Happy Birthday, Cassini—and Thanks for the Great Images

Since the Cassini space probe reached Saturn on July 1, 2004, it's visited many of Saturn’s moons, given scientists new insight into Saturn’s atmosphere and cloud patterns, and done a bang-up job as an astrophotographer. 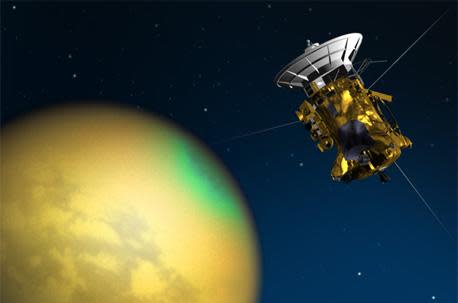 When the 17th century astronomer Giovanni Domenico Cassini stared through a telescope at mighty Saturn, he knew he had found his life's great work. The planet was only just beginning to come into focus, in the metaphorical sense: The Dutch astronomer Christiaan Huygens had just recently revealed Saturn's rings and its first known moon, Titan. Over decades of study, Cassini went on to discover four of Saturn's moons along with the so-called Cassini Division between Saturn's brightest rings.

The astronomer's namesake--the Cassini space probe--is now helping us learn about the ringed planet. The probe launched in late 1998 and traveled about 2.2 billion miles to reach Saturn; it entered the planet's orbit on July 1, 2004.

Since then, the spacecraft has visited many of Saturn's moons--including Titan, Iapetus, and Rhea--while giving scientists new insight into Saturn's atmosphere and cloud patterns. Observations from Cassini, which is a collaboration between NASA, the European Space Agency, and the Italian Space Agency, have also illuminated the structure of Saturn's rings.

This artist's rendering depicts Cassini's approach toward Titan, one of Saturn's 60+ moons. The spacecraft's field instruments observed Titan's northern region this past June. 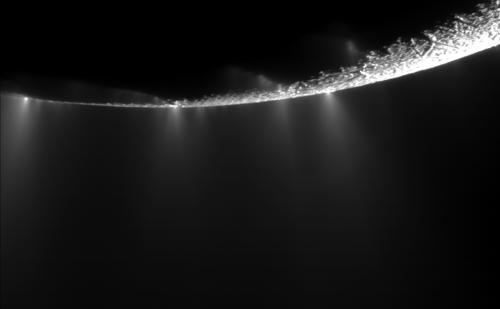 Jets of water vapor and ice spray from cracks in the surface of Enceladus, the sixth-largest moon of Saturn. Along with water and ice particles, these fractures--known as tiger stripes--also spit out organic compounds like methane. This image consists of a compilation of two photos taken from about 9,000 miles from Enceladus' surface when Cassini journeyed past that moon on November 2009.

Scientists are studying the activity of the jets over time--of the 30 jets in this image, 20 had never before been seen--and trying to figure out whether liquid water reservoirs are hidden below Enceladus' rocky surface. Liquid water would increase the chance that life has taken hold on the small mooon.

Enceladus was named for a mythological giant, but with a diameter measuring just over 300 miles, the moon is a mere one-tenth of the size of Saturn's largest moon, Titan. 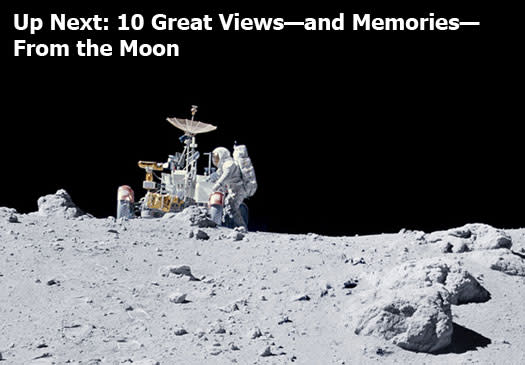 Enceladus also reflects almost all of the light that hits it, as this photo illustrates. Here, the bright rings of Saturn spin in the foreground; Enceladus is behind them.

A sliver of this moon shines brightly from light from the sun, while the rest of the moon appears dimmer, reflecting the sunlight that bounced off of Saturn. The photo was taken about 932,000 miles from Enceladus on February 11, 2010, and has a northern-facing viewpoint of Saturn's rings, which are illuminated by sunlight. 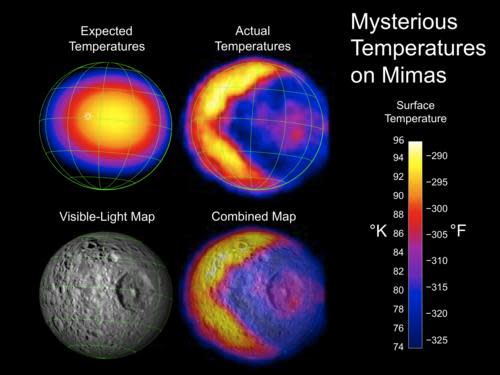 Mimas, one of Saturn's innermost moons, was another of Cassini's targets--which is fitting because Mimas looks rather like a bulls-eye, thanks to the huge circular crater on its surface. And the pictures and data Cassini sent back delighted fans of Pac-Man everywhere. 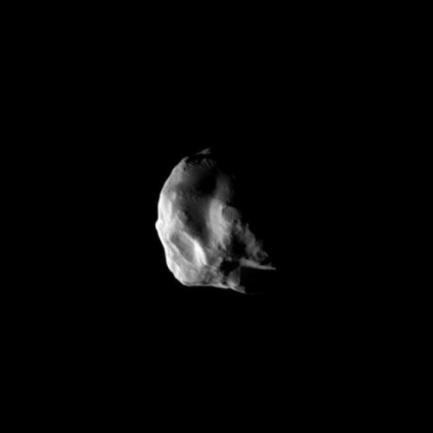 On March 3, 2010, Cassini got up close and personal with Helene, an irregularly shaped moon of Saturn. Taken 1,200 miles from Helene, this is the closest photo ever taken of the minute moon, which measures only 20 miles across.

Helene follows the same circular path around Saturn as the moon Dione, and processes just ahead of that much larger moon. The spacecraft last approached Helene in 2006, revealing craters and chips on its surface that appear to have been caused by flying objects debris. 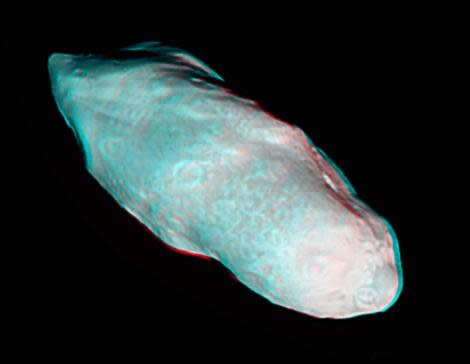 Just as a 3-D movie combines two similar but slightly different images to form a three-dimensional image, this snapshot of the Saturnian moon Prometheus is actually two photos in one.

The composite consists of two black-and-white images that were captured from different angles on December 26, 2009. Red-blue glasses--the kind worn to view 3-D movies--reveal a lifelike picture of Prometheus. Long and thin, this moon measures about 90 feet in length, and its uneven surface is rife with craters. Its low density has led scientists to speculate that it may consist of porous, icy material. 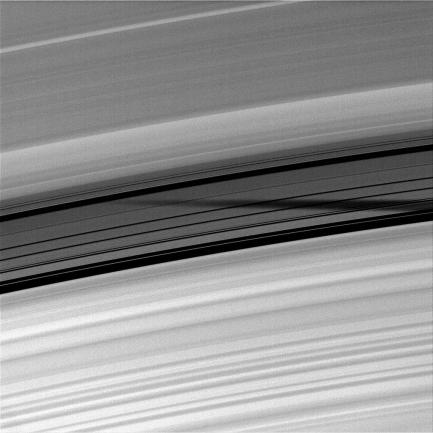 The Cassini spacecraft has revealed much about Saturn's moons, but that doesn't mean Saturn itself has been forgotten. Here, Cassini captured Saturn's rings at a location known as Cassini's Division.

This division is the largest gap found within Saturn's ring system and is created by the gravitational pull of Mimas, one of Saturn's moons, on the planet's ring particles. Although the size of Cassini's Division varies along the gap, on average it measures about 3,000 miles wide. From Earth, the gap looks like a void between busy rings, but in the 1980s the two Voyager spacecraft determined that Cassini's Division contains its own dark and diffuse ring material.

This picture, taken by the Cassini probe in 2009, shows the shadow of Mimas as seen through the unlit side of the Cassini Division. 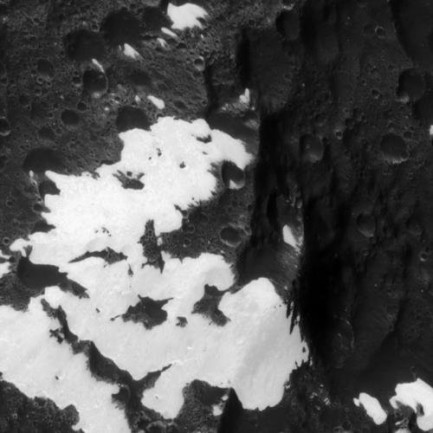 Although Saturn's moon Iapetus was first discovered by Giovanni Cassini in 1671, it wasn't until 2007 that we earthlings got a close-up look at the patches of mountains on Iapetus' surface.

Picking up where the spacecraft Voyager 2 left off in 1981, Cassini made one flyby of Iapetus, snapping photos of the dual-toned moon. The mountainous regions in this photo are located in the transition between the mountains' lighter- and darker-colored hemispheres.

Just last year, researchers offered a hypothesis to explain why one side of the moon is conspicuously darker than the other. They say dust particles may be flying off another moon, Phoebe, and are smacking into Iapetus's leading edge "like bugs on a windshield." 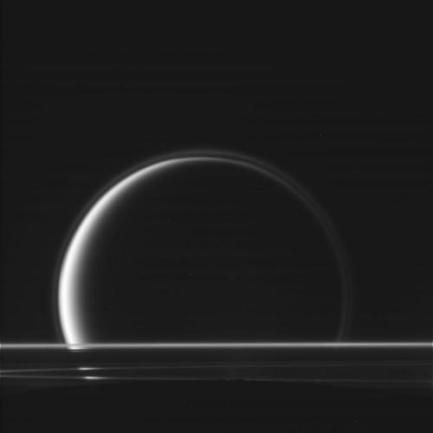 In this photo taken by Cassini in May 2010, the moon Titan looms behind Saturn's rings. Titan is hefty moon--in fact, it's almost as large as the planet Mars.

Its thick atmosphere made it impossible for previous spacecraft to capture images of its surface, but Cassini's camera is capable of seeing through the haze. These photos show a landscape marked by mountains, lakes, dunes, and canyons carved by flowing liquids. Still, even with this knowledge, there is much to learn about how the geology and atmosphere of this monstrous moon.

Some researchers think that Titan, with its thick atmosphere and lakes of liquid methane, is the likeliest spot to find extraterrestrial life in our solar system. While Cassini continues to send back tantalizing suggestions of life on the moon, the big question won't be answered any time soon. 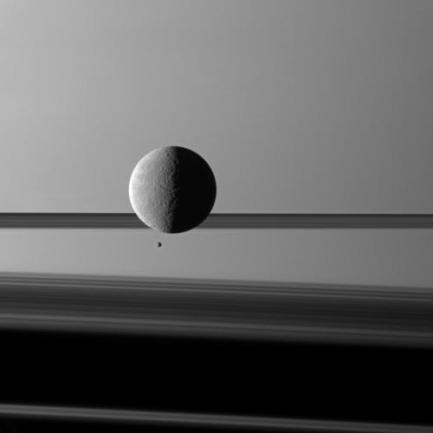 As every photographer knows, perspective can have a big impact on the way objects are perceived. In this photo, Saturn's moon Rhea appears to hover just above the moon Epimetheus, with Saturn's rings in the background.

The SciencesThe 2019 South American Eclipse, as Captured By Those on the Ground
Recommendations From Our Store