A geyser spews as much gas and water as Old Faithful. 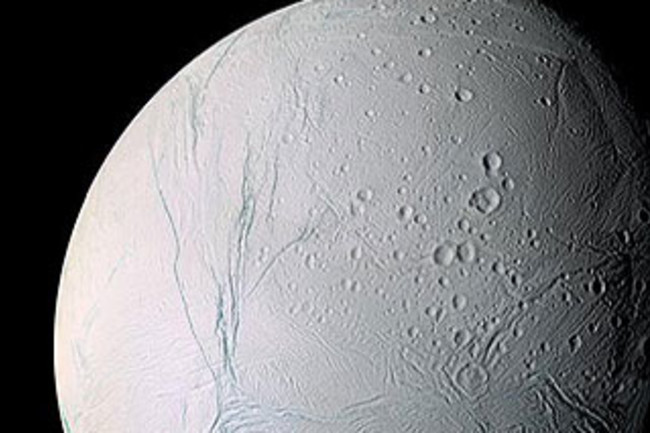 Scientists were stunned when the Cassini spacecraft transmitted images of a geyser-like plume spouting from a tiny moon of Saturn no wider than Arizona. Huge geysers seem to be erupting from fissures in Enceladus's south pole, pouring tons of water vapor and ice into a thin ring around Saturn.

To understand this improbable water fountain in space and whether we should expect life to be teeming beneath, we spoke with John Spencer, an expert on the moons of giant planets who is part of the Cassini team, working at the Southwest Research Institute in Boulder, Colorado.

What are the geysers like?JS: They are jets of water vapor and dust—really very fine water ice particles that are coming out of large fractures in the south pole of Enceladus. They were discovered last summer when we flew very close to Enceladus. We actually flew through this plume of water vapor and were able to sample it directly with the Cassini spacecraft.

So liquid water has definitely been discovered?JS: This is not a direct detection of liquid water. It's an inference from the characteristics of this cloud of ice grains that is now being seen by the cameras. Liquid water is not certain, but it's probably the most plausible interpretation. But we don't know for sure.

How big is the plume?JS: It's several hundred miles, certainly. It is as big as Enceladus itself, and probably bigger. It's not as though the stuff goes up and falls back to the surface, as happens with the eruptions of volcanoes on Io. This stuff just goes up and keeps on going, so defining the top of it is kind of tricky. The gravity is tiny on Enceladus, and this vapor is going fast enough that it will escape the gravity. It will blend out into the dusty environment of the E ring [the outermost ring of Saturn].

What is causing this eruption? JS:

You need quite a lot of energy if you are going to produce these geysers, and water boiling off into a vacuum is a good way to do that. If you expose liquid water to a vacuum, it boils explosively and it freezes at the same time. And so it's a pretty violent event. The boiling point becomes equal to the freezing point. So you get this very explosive boiling and freezing. So that's plenty of power to shoot stuff off the moon.

Was anything found besides (frozen or liquid) H2O? JS:

Because we have actually flown through the plume, the mass spectrometer on board of Cassini got a direct composition measurement and found some carbon dioxide in the plume and traces of nitrogen and methane. We did not see ammonia, which is a big surprise because ammonia has always been theorized to be kind of an anti-freeze that would be in these very cold moons. Ammonia makes it easier for liquids to melt and for geological activity to be produced. That was what everyone expected to see, and that was not seen.

Why are these geysers such a huge surprise? JS:

Everything else in the solar system the size of Enceladus is geologically dead or at least dormant. Enceladus is only 300 miles across. We don't expect such small objects to have much internal heat. Also, it's ten times further from the sun than we are, so it's awfully cold. But we measured quite a lot of heat coming out of these fractures. We expected temperatures of around 70 degrees Kelvin [- 300 degrees Fahrenheit] above absolute zero, but we actually saw temperatures in some small areas that were at least 145 degrees Kelvin [- 200 degrees Fahrenheit]. That's much warmer than we expected. Even though that's extremely cold by terrestrial standards, that's a pretty major addition of heat. Our instruments can't look deep down into the fissures, so we couldn't directly see the even higher temperatures you'd expect for the liquid water that might be powering the geysers.

Were their any hints that Enceladus could be odd? JS:

We knew Enceladus was strange ever since Voyager flew past in the early 1980s. We knew it had an extremely bright surface – it's the brightest object in the solar system. The surface is as bright as freshly fallen snow. It has a very strange and complicated geology. The surface has been torn up by internal forces, and there are very few craters. So we knew geological activity had taken place recently. But usually when we say "recently" we are thinking 100 million years ago, not right now. The other interesting thing is that there is a ring of dust or ice particles that surround Saturn right at the orbit of Enceladus. It appeared that debris was coming off Enceladus and feeding into the ring. So we had much circumstantial evidence that something was going on, but I think we were all taken aback to see this very active phenomenon going on under our noses.

What is causing the surprising heat? JS:

It almost certainly has something to do with tidal heating, which is the mechanism that powers the volcanoes on Io. Basically this moon is in an orbit that's not quite circular around Saturn. So sometimes it's closer, sometime it's further away. When it's closer, the shape is distorted by the tidal forces of Saturn. And then as it moves away it relaxes a little bit. So its shape is changing all the time. That produces a lot of friction inside. It produces a lot of heat. And so that's probably the mechanism that produces enough heat to melt water or do whatever it is that it's actually doing down there. We don't understand the details. One of the odd things is that there is another moon right next door called Mimas, where tidal heating should be operating much more efficiently that Enceladus. But Mimas is completely dead. So something is making this happen on Enceladus and not Mimas. We don't have a solution yet.

How probable is it that life exists on Enceladus? JS:

Well, obviously it's wildly speculative. But we know that life needs liquid water, at least the life we can imagine. We know it needs energy. And we've got both of those on Enceladus. Or at least we have some possibility of liquid water – I don't think it is a done deal. It's not impossible that there is life. But it's an awfully small place. The area that's active is less than a hundred miles across. For life to have developed and remained, you would have to have liquid water in that tiny area continually for possibly billions of years. So who knows? But it's certainly going to get people very interested in trying to figure out whether life could survive there. The other place where we have been excited about the possibility of life has been Europa, a moon of Jupiter, which is a far bigger place. We think it has a thick liquid water ocean which is thousands of time more voluminous than any water on Enceladus. And so in that case you might not have as much energy – you don't see it at the surface, you don't see it spouting off into space like we do with Enceladus – but you have a lot more space for things to happen and more places for things to hide. But in this one respect of having energy and having water at the surface, which could be a source of energy, Enceladus is looking very interesting.

Besides the surprise aspect, why is this discovery significant? JS:

This is a very exclusive club of bodies on which we can see current internal geological activity. There's the Earth, there's Jupiter's moon Io, there's Enceladus, and that's it. So that's very exciting in itself. We see evidence in many worlds in the outer solar system for ice vulcanism, if you want to call it that, where you have a surface that is mostly ice and there seem to be eruptions and disturbances and fracturing of the surface. And so to actually have a living example to study is really more than we could have hoped for. You can learn so much more when you can see something happening, rather than just picking over the bones of it millions of years later.

NASA is under fire right now for proposing cutting programs for unmanned space exploration so that they can invest in getting people to the moon and then Mars, and to maintain the space station. Could you comment on the value of unmanned missions like Cassini? JS:

This discovery is an example of the tremendous science you can get out of unmanned space flights. The return on these things is incredible. I hope the unmanned space program maintains a funding level that is commensurate with its enormous return, particularly given the meager scientific returns we are getting with things like the space station. You can do spectacular science without humans. I think the arguments for humans in space are not really scientific arguments. They are political. They are: We want humans in space because we think humans should be in space, not because it is the best way to do science.