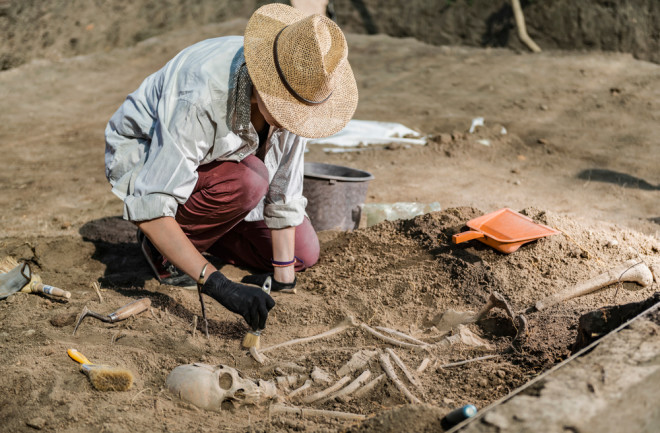 Thanks to archeological discoveries, we’ve been able to learn invaluable information about many facets of history. Which life forms existed, how they lived, and how and when they died have emerged because of evidence unearthed by archeologists and other scientists. The Rosetta Stone, the Dead Sea Scrolls, King Tutt’s Tomb and the ruins of Pompeii are some of the most well-known. Within the last decade alone, archeologists have made some major discoveries. Let’s look at five of the most interesting archaeological discoveries of the last 10 years.

The Remains of King Richard III

When King Richard III was killed at the Battle of Bosworth in 1485, he was buried in the church of the Grey Friars. In 2012, The Richard III Society collaborated with the University of Leicester to excavate under a Leicester parking lot to look for the church — which they found. But even more shocking was that they also discovered human remains thought to be King Richard III. DNA taken from two living descendants, along with carbon dating, proved it was him. His bones showed 10 battle wounds, including two to the body and eight to the head, as well as evidence of scoliosis. The University of Leicester has a comprehensive website about the various aspects of this archeological project, including details about the scientific methods involved in the identification process and where King Richard III’s remains are now.

When the Saint-Bélec Slab was found in 1900, it was largely ignored. But when it was rediscovered in a French castle in 2014, researchers decided to investigate this 5-foot by 6.5-foot piece of stone. Researcher Clément Nicolas from Bournemouth University in the UK, along with his team, used modern techniques to analyze the 4,000-year-old slab. They found that the drawings and lines carved onto one side of the stone depicted the Odet River valley. Researchers thought the repeated symbols and lines resembled a map. When they compared it to a modern map of the area, they found that it was an 80% accurate match. This makes the Saint-Bélec Slab the oldest known European map.

When Egyptologist Ernesto Schiaparelli discovered Queen Nefertari’s tomb in 1904, he found a portion of mummified legs. It was believed that they belong to Queen Nefertari, but it wasn’t until 2016 that it was proven. When researchers X-rayed the legs, they concluded that they were that of a female about 5 feet 5 inches tall, who was between 40 and 60 years old when she died — the same age Nefertari would have been. Nefertari was the wife of Ramses II, who ruled Egypt from 1279-1213 BCE and is considered one of the most notable Egyptian queens, along with Cleopatra and Hatshepsut. When her tomb was discovered, researchers also found sandals of high quality. Made with natural materials such as papyrus and grass, they reflected the style of the time and are believed to have belonged to her.

Archeological excavations in Peru that concluded in 2016 established what was believed to ben the world’s largest child sacrifice. In total, archeologists located the remains of 137 children between the ages of 5 and 14 who were sacrificed over 550 years ago by the Chimu empire. They had broken ribs, cuts along the chest area and other injuries. Researchers believe the children's hearts were removed. Young llamas were also sacrificed at the site at the same time, with their hearts likely cut out as well. While the children were buried facing the sea, the llamas were positioned to face the Andes mountains. Scholars believe the sacrifice was offered to the gods in response to floods caused by El Nino.

In 2017, ceramic jars found near Georgia’s capital, Tbilisi, turned out to be the oldest evidence of winemaking. Prior to this discovery, the earliest chemical proof of wine was in Iran, from 5400-5000 BCE. But this older evidence means that wine existed as long ago as 6,000 BCE, making the pots about 8,000 years old. Researchers used scientific chemical tests to sample shards from the pottery. Tests confirmed residue of tartaric acid, the main acid found in wine, as well as associated acids of citric, malic and succinic. Testing of the soil collected near the pottery revealed much lower levels of tartaric acid than the pots, suggesting that it wasn't naturally occurring.