Why Did the Ancient Chimú Civilization Sacrifice Hundreds of Young Lives?

A mass sacrifice of children and llamas 550 years ago may have been a desperate attempt to appease the gods in the wake of heavy rain and flooding. 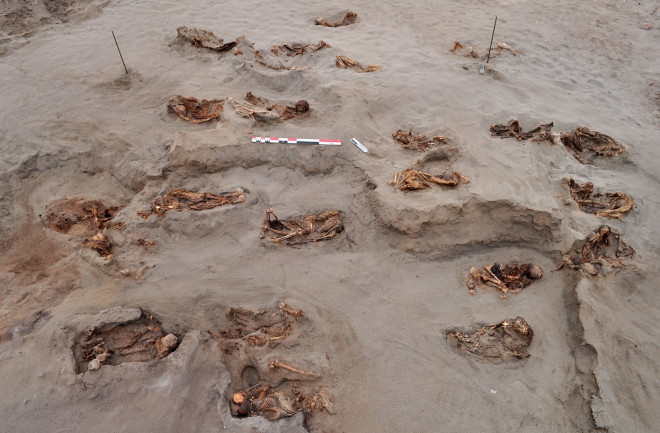 After the Chimú children were sacrificed, their remains were arranged in groups of three by chronological age, often resting on their backs or sides with their legs flexed. Children were placed facing northwest, toward the ocean. The llama bodies were placed on top of or next to them, facing east toward the Andes Mountains. (Credit: Prieto et al. 2019 PLoS ONE)

The question haunts a seaside burial in northern Peru, where hundreds of remains from the largest-known mass child sacrifice in the Americas were found. The site, known as Huanchaquito-Las Llamas, dates back some 550 years to when the region was part of the Chimú Empire, which flourished between the 11th and 15th centuries.

The burial was hidden from sight until 2011, when locals discovered bones poking out of eroding sand. By the time excavations concluded in 2016, archaeologists had unearthed 137 children between the ages of 5 and 14, three adults and 200 animals believed to be young llamas — all sacrificed at about the same time.

The site sits just a thousand feet from the Pacific Ocean, next to a modern fishing community. The location is not far from Chan Chan, which, 550 years ago, was the ancient capital of the Chimú Empire and one of the largest cities in pre-Columbian America. (Credit: John Verano)

Many children’s remains were found with broken ribs and other injuries. Consistent cuts across the chests suggest an experienced hand made them, possibly to remove the hearts while the children were still alive. Cut marks on the llama bodies suggest their hearts were taken, too.

Footprints made by a sandaled adult, the bare foot of a child, and a llama are among many preserved at the site, suggesting a procession. (Credit: Prieto et al. 2019 PLoS ONE)

Like some other pre-Columbian cultures, the Chimú practiced human and animal sacrifice. But this macabre find still caught archaeologists by surprise.

“I’ve been digging for 35 years on the north coast of Peru … We had no knowledge that the Chimú sacrificed children,” says John Verano, co-leader of the excavations and a biological anthropologist at Tulane University. “We also had no idea that they sacrificed people this way, by cutting the chest open.”

Clues to what might have led to the sacrifice lie in the soil itself. A layer of mud at the site suggests the event happened after heavy rainfall. Desperate leaders may have hoped a large-scale killing would put a stop to devastating weather.

Changing the skull’s natural shape was practiced in Chimú culture, serving as markers of group identity. Some children had modified skulls, which suggests they came from different regions within the Chimú civilization. “This is a very multi-ethnic, cosmopolitan group. They didn’t pick one particular population and draw their victims from it,” Verano says. (Credit: Prieto et al. 2019 PLoS ONE)

Since wrapping up excavations at Huanchaquito-Las Llamas, the team has uncovered additional burials of sacrificed Chimú children. Verano says they’ve dug up hundreds more remains so far, and it’s likely that more lie beneath the sand.

“Every place we put a shovel in, we find a child sacrifice,” Verano says.

Llamas were important resources for the Chimú. But children were likely the most prized sacrifice that could be made to their gods. “Children, of course, were probably chosen because they are innocent, they are not adults yet,” says Verano. “If you’re offering children, you’re offering something that’s extremely valuable to you. I don’t think anyone ever sacrifices children lightly.” (Credit: Prieto et al. 2019 PLoS ONE)
1 free article left
Want More? Get unlimited access for as low as $1.99/month
Subscribe