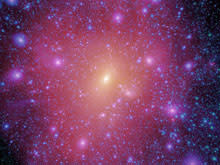 The Fermi Gamma-ray Space Telescope may have just gotten a hint in its hunt for the mysterious dark matter that is thought to make up the bulk of the universe's mass. A group of astrophysicists has run a simulation of the distribution of dark matter in a galaxy like our Milky Way, and say that if the telescope scans the right region of space it may be able to detect gamma rays given off by collisions between the particles that are thought to make up dark matter (which have never been directly detected, and are still speculative). Previously, some cosmologists have proposed that

the best chance of a detection lies in nearby dwarf galaxies, since they should contain dense nuggets of dark matter that could be relatively easy to pinpoint. But a new study argues that a diffuse dark matter 'halo' surrounding the Milky Way offers an even better shot at glimpsing the mysterious stuff. "I would bet on it," says lead author Volker Springel.... "And I'd be willing to risk a bit of money as well" [New Scientist].

In an article published in Nature [subscription required], researchers explain that they simulated the growth of a Milky Way-like galaxy, and found that the galaxy's halo of dark matter

grew through a series of violent collisions between much smaller clumps of dark matter that emerged from the Big Bang. In the densest part of the halo, the dark matter particles collide at high speed to produce a form of radiation called gamma rays. These gamma rays make the halo glow, giving scientists a potential way to detect dark matter [Reuters].

If the Fermi Telescope searches the part of the sky where researchers predict the most concentrated part of the halo lies, they may find a "characteristic pattern" of gamma rays, the researchers suggest.

"The search for dark matter has dominated cosmology for many decades," said [study coauthor] Carlos Frenk.... "It may soon come to an end" [SPACE.com].

What Shape Is the Universe?

What Is the Scientific Method and How Did It Shape Science?

The SciencesBetelgeuse: The Supernova That Wasn't
Recommendations From Our Store