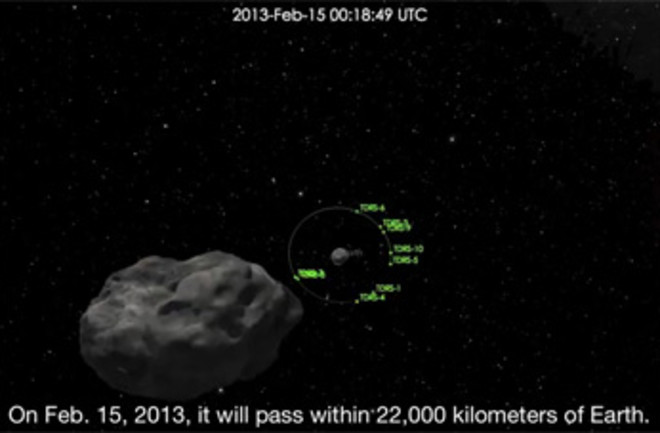 Asteroid 2012 DA 14 was discovered a few weeks ago: a 40-meter wide rock on an orbit that brings it pretty close to Earth. Next year, on February 16, it will pass about 27,000 km from the center of the Earth (roughly 21,000 km from the surface), which is pretty close, but still a clear miss. I wrote about this asteroid earlier this week, and the comments have been pouring in. People are asking if it will hit (no), if the Earth's gravity will change the orbit of DA 14 (yes), have astronomers accounted for that (yes), and will it ever hit us sometime in the future (we don't know; see below). One commenter, Chris Laurel, created a wonderful photo-realistic animation of the pass of the asteroid using software called Cosmographia, and, well, I think it will answer most people's questions and fears:

Isn't that cool? I did some spot checking using the JPL numbers and diagrams, and this looks pretty accurate to me. You can see how it approaches and misses us, and then he backs out a bit to show that the asteroid's path is warped significantly by Earth's gravity. So, to be very clear: next year, in February,

this rock will miss us

However, the amount the orbit is changed by Earth depends on precisely how close it comes, and we can't measure the orbit that accurately just yet, even though we know it well enough to know it will miss. So what we really need are as many telescopes watching this event next year as possible for as long as possible. That will greatly reduce the uncertainty in the asteroid's position over time, and allow for a good measurement of the orbit. It's overwhelmingly most likely that the Earth's gravity will put the asteroid into an orbit where it will miss us again for some time to come, but the only way to be sure is to really nail down its orbit. I'm sure there will be an organized campaign with observers all over the world to do this. I'll post more about that when I hear more, probably in the next few months.

Related Posts: - No, asteroid 2012 DA14 will not hit us next year - Asteroid 2011 AG5: a football-stadium-sized rock to watch carefully - My asteroid impact talk is now on TED! - Just to be clear: asteroid YU55 is no danger to Earth - Media FAIL *again* (HuffPo and Apophis edition) - Debunking doomsday