High radiation, low gravity and other environmental pressures could spur Martian humans to mutate relatively quicker than on Earth. 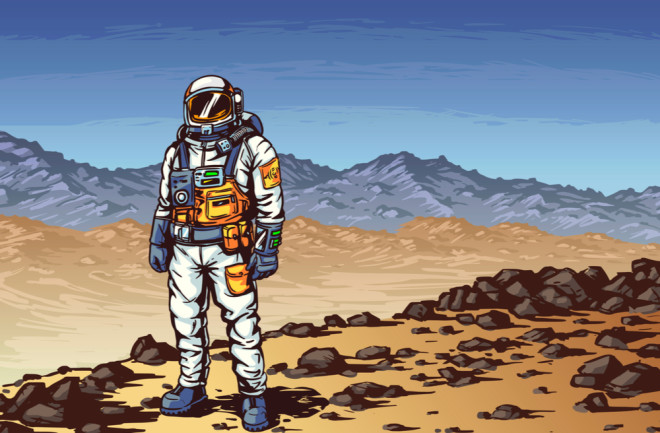 As it turns out, human colonization of the harsh and exotic atmosphere on Mars (if we can achieve it) might accelerate our species’ evolution. “Given how different the Martian environment is, you’d expect strong natural selection,” says Scott Solomon, an evolutionary biologist at Rice University in Houston, Texas.

Mars sits about 34 million miles away from Earth, depending on the orbital position of both planets, and us Earthlings still face a number of obstacles before we could even reach it. But if we get to Mars and establish a colony of permanent residents, factors like comparatively higher radiation, lower gravity and a vast change in lifestyle could prompt significant evolutionary changes in human bodies — much quicker than those that have transpired on our native planet.

Solomon first began pondering how humans might further evolve while teaching introductory biology. He asked students to imagine the ways in which humans may continue to evolve — this question led him down a rabbit hole that inspired his 2016 book, Future Humans.

Solomon’s research touches on the hypothetical evolutionary outcomes of humanity’s colonization of Mars. A determining factor in this venture: the precise level of isolation, which would vastly influence how quickly humans would adapt to new conditions. If humans moved back and forth from Earth and Mars as quickly as every generation or two, new influxes of Earth-born human genes moving to the Martian colony could slow the effects of certain genetic mutations. Meanwhile, remaining within the vastly different conditions on Mars might speed up the pace of human evolution. “It could be hundreds of years in the right circumstances,” Solomon says.

Meanwhile, certain populations have developed characteristics to help them deal with local conditions. For example, high-altitude dwelling groups of humans may have adapted traits that helped them live in such extreme environments. Still, much of this is just plasticity, or the ability of a species to adapt to specific surroundings by taking on various sizes, behaviors and shapes, rather than true evolution. “We can adjust our physiology to different circumstances to a pretty large extent,” Solomon said, as evidenced by the fact that modern humans never evolved into new species despite experiencing vast environmental differences.

But it’s possible that Martian humans could live completely isolated from Earth due to a number of conditions, whether economic, political or otherwise. For one, diseases unique to either Earth or Mars could emerge and invoke travel embargoes.

More intense radiation on Mars could also provoke elevated rates of genetic mutations in humans born there. And any favorable mutations that help humans better cope with conditions on Mars may be inherited by future generations. “Increasing the mutation rate gives natural selection more material to operate with,” Solomon says.

But these mutations could also be random. If a number of people happen to develop the same chance mutations, either among those living on Mars or their ancestors on Earth, it could cause something like a founding effect. A Mars settlement is likely to consist of a relatively small community in the beginning, and any traits that these founders may share could have a disproportionate effect on the future human development there: This could be as simple as a relatively high number of redheads.

But patterns in hair (or even skin) color wouldn’t technically qualify Martians as a new species, Solomon cautions. Yet it's possible that even the first generation of Martians may develop notable physical differences from Earthlings due to gravity changes in a foreign atmosphere, among other adjustments. “They might look different, they might act different,” he says. “They might have physical changes that might be obvious to people that compare them.”

Survival of the fittest is a key concept in evolution. But it doesn’t mean the environment will primarily dictate the type of traits that render people well-suited for Martian life. Height seems like an obvious factor in these differences, since Mars has three-eights of Earth’s gravity.

“Science fiction has often portrayed Martians or aliens coming from Mars as being tall and lanky and thin,” Solomon says. But the effect could actually be the opposite. The problem is that these body types might pose certain hazards during childbirth — weakened skeletons could fracture people's pelvises while giving birth. So, natural selection may actually favor shorter people with denser bones.

Also, Mars’ high radiation levels could directly affect characteristics like skin color or eyesight over generations of evolution. This has already happened on Earth — melanin is more resistant to ultraviolet rays, for example.

“Perhaps in the face of this high radiation, we might evolve some new type of skin pigment to help us deal with that radiation,” Solomon says, adding that we could potentially evolve cancer-resistant genes. “Maybe we get our own green men.”

He cautions also that these specific ideas of how we might change are mere speculation. We still need to learn plenty, like how childbirth or an infant's survival and development may be affected by space living.

Writing Our Own Evolutionary Destiny

Unique cultural traditions that develop on Mars could also have a long-term effect on evolution. Distinctive eating practices, for example, if maintained over generations, may affect the evolution of our digestive system.

Epigenetics, or the influence of behavior and environment on gene expression, could also play a factor in human evolution on the Red Planet. But this science isn’t very well understood yet, Solomon notes. He points to the research on the astronaut twins Scott and Mark Kelly performed by NASA. The former spent a year in space while the latter remained on Earth. Analysis detected changes in Scott’s genes, though it’s still unclear how these shifts may affect him in the long term.

But based on significant advances in gene editing tools like CRISPR, it’s possible that humans on Mars may not need to leave evolution up to natural selection. Solomon says we currently have the tools to work with potential Mars residents — we just don’t necessarily know what specifically to tweak (or how to do it). Nevertheless, scientists could modify people’s genes before or after a Mars journey. “It could potentially be a powerful tool to go ahead and make those changes so people could survive and be adapted to the Martian environment,” Solomon says.