Our neighboring planet only sits 34 million miles away, so what’s the big hold up? 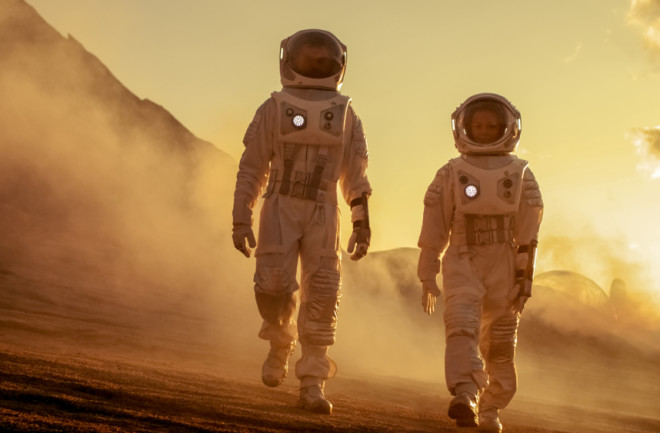 In an earlier version of this story, we had stated that Mars was 34 billion miles away, when in actuality, it's only 34 million miles away. We have since fixed this error and apologize for the mistake.

When it comes to interplanetary destinations in our solar system beyond Earth, there isn’t a lot of great options when it comes to weather, conditions, or even simply solid ground. Our near neighbor Venus is so hot we’d burn up before getting anywhere near solid ground. Pluto and breaks the thermometer in the opposite direction with temperatures as cold as -400 degrees Fahrenheit. Meanwhile, Neptune, Uranus, Saturn and Jupiter are mostly made up of toxic gases that would kill us even if they did have solid ground to walk on. And that’s without even mentioning the storms.

Mars is really the only planet that sits within the habitable orbit around our sun. After more than a half century, humans have walked on the moon and delivered spacecraft that has flown to Pluto and even left the edges of our solar system. We’ve even landed several spacecraft on Mars, including the NASA Perseverance rover and China’s Zhurong rover currently moving around the planet and beaming back photos and other valuable information as we speak.

So why haven’t humans yet traveled to Mars?

According to NASA, there are a number of obstacles that we still need to overcome before sending a human mission to the planet, including technological innovation and a better understanding of the human body, mind and how we might adapt to life on another planet.

In short, these obstacles can be summarized into three major problems, say Michelle Rucker, lead of NASA’s Human Mars Architecture Team at NASA’s Johnson Space Center and Jeffrey Sheehy, chief engineer of the NASA Space Technology Mission Directorate: Get there, land there, live there and leave there.

“The first obstacle is just the sheer distance,” Rucker says. The Red Planet is about 34 million miles away at its closest point. But the distance to Mars isn’t always the same. The Earth and Mars orbit the sun at different distances and speeds, meaning that there are certain more optimal periods to travel between the two, especially considering the idea is to not just to make it to Mars quickly, but to make it back.

“The trains to Mars are every 26 months,” Sheehy says, adding that the last such window occurred in July 2020. That last train was perhaps the busiest period ever seen for interplanetary travel—three uncrewed Mars missions were launched last summer in the space of two weeks.

All 26-month windows are not the same, though. Sheehy notes that on top of this, there is a larger roughly 15-year cycle when that window is even more favorable than others. But Sheehy says that a vehicle optimized to reach the planet during the most favorable opportunity might not be necessarily the same we’d need for other years. Focusing all our efforts on reaching Mars in that window would mean we’d only have a chance every 15 years—it would be something of a “one-trick pony” in other words.

Technology of course plays a role in all of this. Most rockets that we’ve launched out of the atmosphere have been propelled by rocket fuel. But this fuel for an all-chemical propulsion system would take a lot of space, and wouldn’t be optimal for the longest travel times. To reach Mars quicker and more often a system based on nuclear thermal propulsion or nuclear electric propulsion would be more effective—and that’s if we set our sights low in terms of ship size, Sheehy says. His organization is working on several different nuclear fission technologies, including a fission surface power system. They plan to demonstrate one on the moon.

Aside from technology, we also need to learn more about how humans—creatures that evolved to live in the Earth’s atmosphere with the Earth’s gravity—are going to cope with being in a low gravity, close proximity, close environment situation on spaceships for several months of transit.

Work on this has been underway for some time, whether it’s studying how astronauts living on the International Space Station cope with the isolation and low gravity up there, and how they cope when coming back to Earth. The various lunar missions have also revealed how the astronauts there dealt with the low-gravity situation there

Furthermore, missions like NASA’s CHAPEA, a planned yearlong Mars simulation, will also informing scientists about what kind of problems might arise with a small group of people over a long mission. Other ongoing research missions in Antarctica can also help inform us what to expect. These kinds of questions are important for determining how long it takes, and how many people are needed, to pull off basic tasks.

Another concern is how humans might be able to manage living in small confined spaces for a long time without much outside contact. “If you are tired of the food you’re eating you can’t say ‘Let’s order a pizza,’” Rucker says.

But another tool to help us learn how to cope with unexpected challenges will be the Artemis mission, which is working to keep a sustainable population on the moon. Many of the technologies for day to day living on the moon, as well as how living conditions might affect the people there, will help to inform a future Mars mission.

Getting to Mars’ orbit is only half the battle. The other challenge is landing on the Red Planet safely, though not necessarily in one piece. Sheehy says that NASA is working on developing an inflatable decelerator—something like a reverse parachute that would protect and slow the landing craft while penetrating the atmosphere. To actually land, the craft would need something like supersonic retropulsion—basically jets on the bottom that reverse the massive thrust enough to bring the craft safely to the ground.

To overcome the challenge of developing this, Sheehy says that NASA plans to launch such a system into our orbit then land it back on Earth to see if it works.

Once on the ground, another potential obstacle is the dust storms. Dust proved to be a major irritant to astronauts on the moon. Since no wind or other forces erode the particles, the dust was sharp and chafing on parts of astronauts’ suits. It got everywhere, and irritated the eyes.

Mars dust may not be quite so sharp since there are erosive forces there, but the dust storms can be massive—in 2018 the rover Opportunity went offline after one bad tempest there. Rucker says that researchers have learned a lot about these Martian dust storms, but they’re still not quite sure if they’ve witnessed the worst of them.

Aside from the risk to any astronauts or equipment on the planet, the storms also kick up enough dust to block sunlight, meaning any solar-powered equipment may not work well for a period.

Equipment is a serious concern while on the planet as well. Sheehy says that any human mission to Mars would likely need to be preceded by a cargo delivery.

“Those things would be put there and checked out before we even commit to sending astronauts,” he says.

Other obstacles to overcome would be the building of the ship to travel there. Sheehy and Rucker estimate it would at least need to be the size of a football field in length, depending on the propulsion system technology we go with and how many people we ultimately decide to send. Roughly anything from a little smaller than the International Space Station in size to significantly bigger.

Both believe that we might get there in the 2030s. The next most favorable window for sending humans on a relatively quick round-trip to Mars would be in 2033, but it’s unclear whether politics, budget and technology will be ready by then.

Until then, we’re learning more every day.

“We are laying a lot of the ground work for going to Mars,” Rucker says.