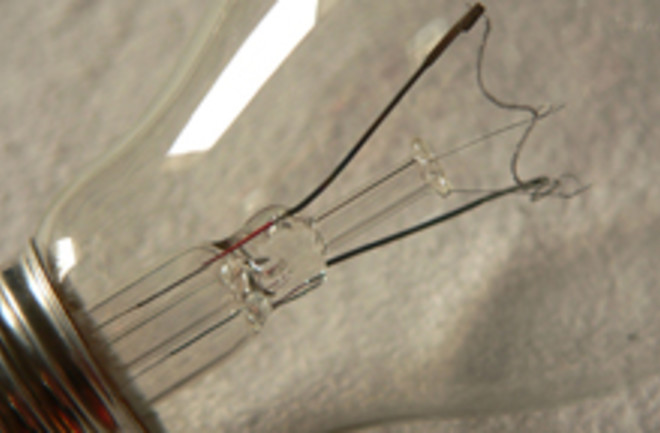 The battle of the light bulb may not be quite over.

While traditional incandescents will soon be phased out in the United States and abroad, researchers are plugging away to create more efficient versions that comply with looming new standards — while also providing an alternative for consumers who find compact fluorescents objectionable [The New York Times, blog].

In one new study, researchers have demonstrated how an incandescent bulb can be modified to give out much more light without requiring more power. Lead researcher Chunlei Guo and his colleagues were

experimenting with the effect of ultrafast laser pulses on metals when they noticed that pulses lasting only a few femtoseconds--quadrillionths of a second--could fundamentally change the molecular arrangement of metals without melting them [ScienceNOW Daily News].

The laser blasts caused the metal to turn black, which boosted its ability to absorb light. Because the law of thermal radiation state that materials that can absorb a great deal of energy will also emit large amounts of energy, the researchers decided to see if their laser treatment would boost the light output of the metal filament in an ordinary light bulb.

They fired a femtosecond laser beam through the glass of an off-the-shelf incandescent bulb. As expected, the lightning-fast beam rearranged the molecules of the bulb's tungsten filament, turning it dark black. But then, when the researchers turned the bulb on, the part treated with the laser shone considerably brighter than the rest of the filament [ScienceNOW Daily News].

When they gave an entire filament the laser treatment, an altered 60-watt light bulb glowed as brightly as a 100-watt bulb, but still used its normal amount of electricity. The findings, which will be published in the next issue of Physical Review Letters, may not be ready for commercialization just yet, but

Guo believes it would not be difficult for bulb companies to add a tungsten blackening step to the manufacturing process. “The implementation should be fairly straightforward,” he said [The New York Times, blog].

However, compact-fluorescent bulbs and light-emitting diode (LED) bulbs are already on the market, and research is continuing on how to make those technologies cheaper, more pleasing to the eye, and still more efficient, so the laser treatment may not be enough to give new life to the old-fashioned light bulb. Related Content: 80beats: Big Advance in OLED Lighting Might Signal Beginning of the End for the Bulbs DISCOVER: Future Tech shows why the light bulb is becoming as quaint as a vacuum tube

More From Discover
The Sciences
The First Atomic Bomb Created This ‘Forbidden’ Quasicrystal
The Sciences
Recommended Books to Read Summer 2021: The God Equation | Drunk | Empire of Ants
Technology
Want to Understand How Lithium Ion Batteries Work? Play a Game of 'Jenga'
The Sciences
Bosons, Fermions and Anyons: What Are the Three Particle Kingdoms in the Quantum World?
The Sciences
Schrödinger’s Cat Experiment and the Conundrum That Rules Modern Physics
Environment
Why Extreme Heat Might Cancel Your Flight
Recommendations From Our Store
My Science ShopDiscover STEM Kits
My Science ShopDiscover 2022 Calendar
My Science ShopStrange Science
My Science ShopElements Flashcards
Shop Now
Stay Curious
Join
Our List