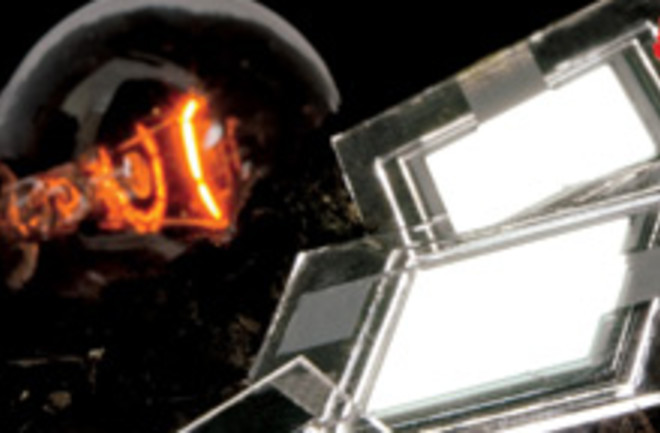 The up-and-coming electronics technology known as organic light-emitting diodes (OLEDs) has spent the week in the, yes, spotlight. Earlier this week researchers announced that they had joined OLEDs to a rubbery conductor to make a computer display screen that could be bent, folded, and crumpled. Now, another team has tweaked OLEDs to make ultra-efficient panels that produce a white light similar to that produced by traditional incandescent light bulbs. Study coauthor Karl Leo says some big technical hurdles still need to be overcome, but adds:

"I'm pretty convinced that in a few years OLEDs will be a standard in buildings" [BBC News].

Incandescent lighting is being phased out in some parts of the world because it isn't energy efficient, and it's being replaced by compact fluorescent bulbs or light-emitting diode (LED) fixtures.

But with both fluorescent and LED lighting, the quality of white light produced has always left something to be desired. Fluorescent lighting can make people appear unhealthy because less red light is emitted, while most white LEDs on the market today have a bluish quality, making them appear cold [Technology Review].

In contrast, OLEDs, which are made from organic compounds that emit light when electricity is passed through them, can provide a nice white light, but efficiency problems have held the technology back. As the researchers explain in a paper in Nature, their modifications boosted OLED's efficiency past that of traditional lighting sources. Their

improved device yielded 90 lumens (a measurement of brightness) per watt of electricity consumed.... This compared to 15 lumens for a conventional incandescent light bulb and between 50 and 70 lumens per watt for modern compact fluorescent light bulbs [AFP].

They produced the efficiency gain with a series of technical adjustments. One

trick was to make the outer surfaces of the device from types of glass that have optical properties that more closely match those of the device substrate. Otherwise, much of the emitted light is reflected and either reabsorbed or lost through heat. "In conventional structures, about 80 percent of the light is lost," [Technology Review]

the devices degrade within an hour or two, because the polymers that produce the blue part of the light are unstable. However, Professor Leo said that promising first results on stable, phosphorescent blue polymers are starting to emerge. "I'm personally convinced that it may take a few years, but chemists will solve this problem and find materials which are stable enough," he said [BBC News].

OLEDs are also expensive to produce, but researchers hope that the material can soon be produced in large sheets, making it commercially viable. Related Content: 80beats: Rubbery Computer Screens Can Be Bent, Folded, and Even Crumpled DISCOVER: Future Tech shows why the light bulb is becoming as quaint as a vacuum tube Image: F. Erler / N. Seidler