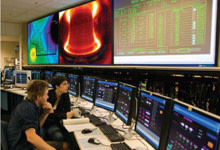 The long-cherished dream of creating nearly limitless clean energy from nuclear fusion--the same process that powers our sun--is looking slightly more possible thanks to a new series of experiments. Researchers working with a reactor at MIT's Plasma Science and Fusion Center have managed to control the motion of million-degree plasma using high-power radio waves.

"Ours is the first definitive result showing that high-power radio waves can significantly affect the flow of the plasma," said physicist Earl Marmar [EE Times].

The radio waves successfully propelled the plasma inside the dount-shaped chamber without hitting the cooler vessel walls, which would halt the fusion reaction, and also prevented the plasma from causing turbulence, which can interfere with reactions.

Fusion is thought to have enormous potential for future power generation, because fusion plant operation would produce no emissions, fuel sources are potentially abundant, and it produces relatively little (and short-lived) radioactive waste. That's unlike nuclear fission (the splitting apart of a heavy atom to release energy), the process that powers all existing nuclear plants [LiveScience].

However, researchers stress that commercial fusion power plants are still a long way off. Physicists still don't know how to make a reactor that generates more power than it consumes, a rather large problem for a potential energy source. This incremental breakthrough by physicists John Rice and Yijun Lin will nevertheless come in handy almost immediately, in the enormous International Thermonuclear Experimental Reactor (ITER) that is now under construction in France

. Lack of a controllable mechanism for propelling the plasma around the reactor "is potentially a showstopper," Rice says, and the ITER team is a"very concerned about this." ... Given that the ITER project, which will take 10 years to build, is already underway, "our results are just in time for this," Lin says [ZDNet].

The results, reported in the journal Physical Review Letters [subscription required], will also give hope to the few investors bold enough to place their bets on fusion energy.

A small group of startups – General Fusion, Tri-Alpha Energy – have received venture funds in the past few years to see if fusion power will be possible on a commercial scale. General Fusion hopes to one day build 50 megawatt plants for $100 million.... Still, there's that problem of actually getting this stuff to work outside of the rarefied atmosphere of a lab [Greentech Media].