Can Engineers Achieve the Holy Grail of Energy: Infinite and Clean?

All they need to do is tame 200-million-degree plasma—without using too much energy. 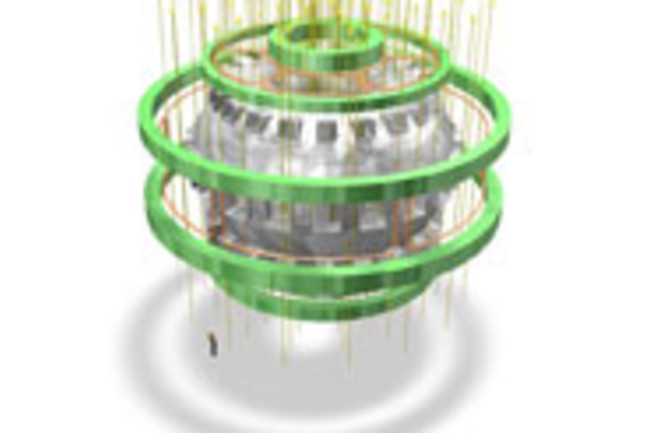 The guts of ITER, a pioneering fusion reactor; include the massive electromagnets needed to hold 200-million-degree hydrogen fuel in place. | © Eric Verdult/Kennis in Beeld

For more than half a century, engineers have been trying to build a miniature sun in a bottle: a fusion reactor. Now an international team is embarking on the most intense effort ever to make it happen. If the group succeeds, we could soon generate nearly boundless power from an isotope of hydrogen that is plentiful in our oceans. That’s a big if, though.

In a basic fusion reaction, hydrogen atoms collide, creating helium and releasing energy. Making the reaction work requires heating the atoms to tens or hundreds or millions of degrees Fahrenheit. At these temperatures matter exists only as a plasma, a soup of negatively charged electrons and positively charged atomic nuclei. In a star like our sun, the plasma is held tightly together by gravity. On Earth, a fusion reactor needs a container—and no material is tough enough to withstand direct contact with the plasma.

There is a way around the problem. Plasmas are made of charged particles, and charged particles are affected by magnetic fields. Physicists have been able to design machines that use electromagnets to trap and manipulate plasmas. The catch is that no machine yet devised can hold a fusing hydrogen plasma long enough to produce more power than is consumed by the electromagnets. The best reactor gets just 6.5 watts out for every 10 watts it takes in. A device that eats more energy than it produces obviously cannot be a power plant.

Researchers from Europe, Japan, the United States, China, India, South Korea, and Russia are working to break the power barrier by building the best plasma container ever devised, known as the International Ther­mo­nuclear Experimental Reactor, or ITER. After more than two decades of planning, the $15 billion project is finally getting under way in southern France.

ITER will house a doughnut-shaped magnetic vessel, called a tokamak, with a diameter of 17 meters [56 feet]. It will be surrounded by superconducting nio­bium coils that create magnetic fields 100,000 times as powerful as Earth’s. These fields will do double duty: They will heat a cloud of hydrogen to the searing temperature required for fusion while forcing the resulting plasma to sit in a ring-shaped cloud away from the tokamak’s walls.

The goal of fusion physicists is to use the heat from a fusing plasma to keep the reaction going indefinitely, without the need to pump in external energy. ITER will not quite get to that point, but with luck, when the reactor is turned on in 2018, it will be able to hold a burning plasma for five minutes or more, allowing it to? release 10 times as much energy as is put in. That would make ITER the first fusion reactor to produce a net surplus of energy. Scientists can then begin working out how to harvest fusion energy for practical use.

Keeping a miniature sun under control is a huge engineering challenge. Some of ITER’s walls will be bombarded with charged particles escaping the plasma, necessitating the walls’ replacement several times during the reactor’s 20-year lifetime. Then there’s a difficulty known as a “vertical displacement event.” According to ITER physicist David Campbell, such an event occurs when the plasma in the doughnut drifts out of control, unleashing tremendous electro­magnetic force. Within a tenth of a second, he says, “the whole structure is pushed up or pushed down” by a force equivalent to about 8,000 tons. ITER will have to be strong enough to withstand such stresses.

Of all the challenges, the biggest may be finding the money to keep ITER going. A previous incarnation of the project died in the late 1990s when the United States pulled out as costs spiraled. History might repeat itself: Late last year Congress gutted the budget for the American portion of ITER, leaving fusion scientists scrambling to keep the project on track. With bulldozers now clearing the site in France, though, ITER scientists swear that this time they are within reach of their dream. “We’re very excited to have the construction project under way,” Campbell says. “We’re keen to make this work, given that we’ve waited for so long.”

Seife is the author of the forthcoming book Sun in a Bottle: The Strange History of Fusion and the Science of Wishful Thinking (Viking Penguin, 2008).