The United States has rejoined the International Thermonuclear Experimental Reactor (ITER) project, placing a high-stakes wager that nuclear fusion—a reaction that runs purely on hydrogen—can steer the country away from fossil fuels and toward energy independence. At a projected cost of $5 billion, ITER will be the second-biggest international scientific investment in history, behind the International Space Station. Richard Hazeltine, a theoretical physicist at the University of Texas at Austin, argues that the investment is irresistible. "We have a clear target: an environmentally benign way to make large amounts of electric power," he says. 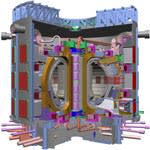 Construction of ITER, a fusion test reactor, is slated to begin in 2006.Graphic courtesy of Iter.

The project almost didn't happen. The United States dropped out in 1998, citing the reactor's excessive cost and complexity. ITER planners finally won back the United States, along with China and Canada, by developing a scaled-back design that halves the price. The underlying technology remains much the same, however. A doughnut-shaped magnetic bottle will confine hydrogen nuclei as they are heated to at least 180 million degrees Fahrenheit. At that temperature, the hydrogen nuclei will combine to produce helium, neutrons, and enough energy to generate electricity and sustain further reactions—a so-called burning plasma. "Creating and controlling a burning plasma is a litmus test for fusion, analogous to the Wright brothers' first flight," says physicist Dale Meade of Princeton University's Plasma Physics Laboratory. These reactions, similar to the ones that power the sun, produce no greenhouse gases and minimal radioactivity.

Like the administration's fuel-cell-car initiative, ITER is about long-term solutions to the country's energy problems. The reactor will not be completed until 2014, and physicists estimate that developing a demonstration commercial-scale fusion power plant could take 35 years or so. "We may fail, but if we succeed, we'll change the world in a wonderful way," Hazeltine says.