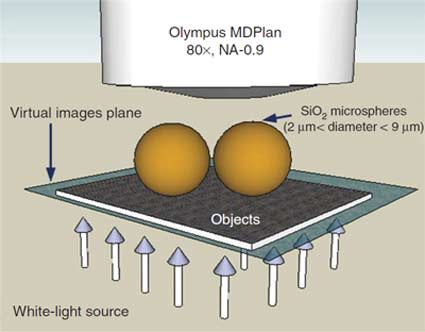 Modern microscopes opened up the world of the minute to an amazing degree, allowing people to see all the way down to a bacterium wriggling on a slide. But if you want to see down even smaller in regular optical light—to a virus, a cell's interior, or other objects on the nanoscale—you've been out of luck. Those objects are smaller than 200 nanometers, what's been considered the resolution limit for microscopes scanning in white light, and so the only was to see them was through indirect imaging devices like scanning electron microscopes. Not anymore. Lin Li and colleagues report a new way using tiny beads to resolve images at 50 nanometers, shattering the limit for what can be seen in optical light.

Their technique, reported in Nature Communications, makes use of "evanescent waves", emitted very near an object and usually lost altogether. Instead, the beads gather the light and re-focus it, channelling it into a standard microscope. This allowed researchers to see with their own eyes a level of detail that is normally restricted to indirect methods such as atomic force microscopy or scanning electron microscopy. [BBC News]

Those beads are called microspheres—they're tiny glass balls about the size of red blood cells. The researchers apply these spheres to the surface of the object they want to see. In essence, the spheres capture light that normally would be lost before it ever reached the observer's eye (those evanescent waves), enabling Li's team to overcome the diffraction limits

of microscope machinery that have limited the maximum possible resolution.

The spheres magnify images of items that are placed on the microscope plate, touching the microsphere and forming “virtual images.” ... The optical microscope magnifies the virtual images, forming a greatly enhanced image. “The microspheres are in contact with objects, and the microscope must focus below the object surface to capture the image. This is a very different practice from the normal use of microscopes,” Li said in an e-mail. [Popular Science]

In the graphic at the top, you can see the plane where those virtual images appear. For the study, Li's team imaged structures like the tiny holes in gold foil or grooves in a Blu-ray disc (seen directly above in scanning electron microscopy at left and microsphere scope at right). But because the technique is so different than normal practice, it's not easy to reproduce.

Physicist and engineer Igor Smolyaninov of the University of Maryland, who wasn’t involved in the research, has used metamaterials to image objects as small as 70 nanometers in size. He doesn’t think the new results are unreliable or untrue, but does see some limitations to the technique. “They looked at artificial structures. Metal lines, holes and such. These are not a virus or bacteria, which are much, much more difficult to see because they move around,” Smolyaninov said. “I tried to do this before but couldn’t convince myself it was real. If they can pull it off, I’ll be extremely happy.” [Wired]

or living cells, that would be a giant step forward. Not only are the current imaging techniques indirect, but they often kill living samples. Says Li:

"Seeing inside a cell directly without [using dyes] and seeing living viruses directly could revolutionise the way cells are studied and allow us to examine closely viruses and biomedicine for the first time." [The Independent]

80beats: Dime-Sized Microscope Could Be a Boon for Developing World Health