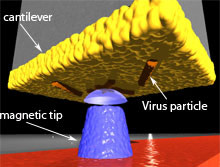 Never before has the nano-scale world of viruses and proteins been so visible. A team led by scientists at IBM Research has developed a new imaging technique based on the same principles used in magnetic resonance imaging, or MRI, which is routinely used in hospitals. But the new process has 100 million times better resolution than a conventional MRI, allowing researchers to construct 3-D images of individual tobacco mosaic viruses, which are only 18 nanometers in diameter.

"This technology stands to revolutionize the way we look at viruses, bacteria, proteins, and other biological elements," said IBM [researcher] Mark Dean.... This advancement was enabled by a technique called magnetic resonance force microscopy (MRFM), which relies on detecting ultrasmall magnetic forces [CNN].

The MRFM process hasn't captured images of the smallest objects ever:

Techniques like atomic force and scanning tunneling microscopes have provided images of individual atoms. (An atom is about one-tenth of a nanometer in diameter). But these techniques are more destructive of biological samples because they send a stream of electrons at the target in order to get an image. And these microscopes cannot peer beneath the surface of the Lilliputian structures [The New York Times].

Researchers say the new 3-D technique will be enormously valuable for the study of protein structures. As described in the Proceedings of the National Academy of Sciences [subscription required], MRFM works by measuring the minuscule vibrations caused by hydrogen atoms that are exposed to an oscillating magnetic field. The researchers placed the virus particles on the tip of a microscopic cantilever arm

and positioned the tip close to a strong, tiny, fixed magnet. As the magnetic spin axes of the hydrogen atoms in the viruses flipped up and down, the atoms were alternately attracted to and repelled by the fixed magnet, thus creating the pushing and pulling on the arm. The strength of these forces indicated how many hydrogen atoms were at a given spot in the virus, and moving the tip around built up a 3-D representation of the virus shape [Science News].

Researchers say the latest advance is a step towards taking 3-D snapshots of individual molecules and the atoms that comprise them.

"The real significance of this is it shows that the limits of MRFM haven't been reached, and they're still on the way to doing an atomic imager," says Jonathan Jacky, a research scientist at the University of Washington. "An atomic-scale imager would be one of the most significant scientific instruments ever. It would be on the same level as the telescope or the light microscope. That's what's really exciting about this" [Technology Review].