Dime-Sized Microscope Could Be a Boon for Developing World Health 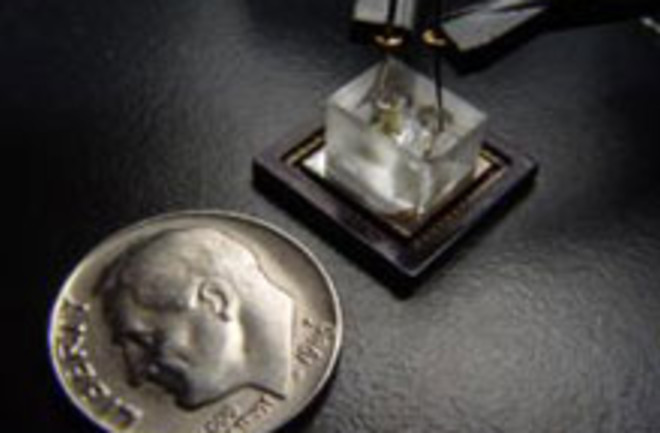 Researchers have invented a microscope that's about the size of a tiny iPod shuffle, and say the cheap, disposable, and sturdy device could be a boon for doctors in the developing world. The microscope, which researchers say could be mass-produced for about $10, could be used to quickly scan a patient's blood for the parasites that cause malaria, sleeping sickness, and other tropical diseases, for example. The new tool could be a useful alternative to the typically bulky optical microscopes, in which

lenses and lights normally needed to illuminate, magnify and focus an image take up a lot of space, and are fragile and expensive to boot [New Scientist].

In contrast, researcher Changhuei Yang says his invention could be slipped into a doctor's pocket, and could be brought to the most isolated village.

"The whole thing is truly compact, it could be put in a cell phone, and it can use just sunlight for illumination, which makes it very appealing for Third World applications," he said [The Independent].

The microscope's biggest innovation is that it doesn't rely on lenses to magnify samples. Instead, scientists

shine light onto a liquid sample flowing through a narrow channel. Below the channel are a series of three-micron-wide apertures, or holes, punched through a layer of metal such as gold or aluminum. The light shines through the holes onto a semiconductor chip studded with a series of sensor pixels. Objects that float over the apertures block some of the incoming light received by the pixels, which reconstruct an image of the object based on the variations in light intensity across multiple apertures [Scientific American].

The invention, which was reported in the Proceedings of the National Academy of Sciences [subscription required], could make it into medical clinics relatively soon.

Yang's lab is currently negotiating with semiconductor companies to mass produce his devices. Right now, it takes two days for one of his grad students to assemble one [Wired News].