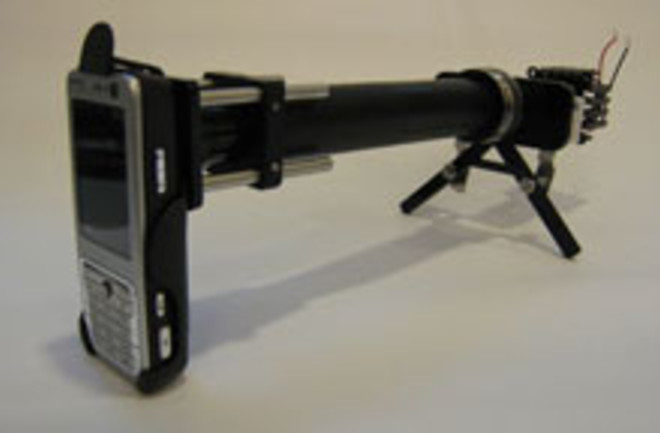 Developing nations may be where infectious diseases like malaria and tuberculosis flourish, but ironically, these regions often have the fewest resources for equipment to diagnose the maladies. A new fluorescence microscope, however, could offer an affordable solution: One that attaches to an ordinary mobile phone. Once snapped on to any mobile phone that has a basic camera function, the microscope can illuminate pathogens, allowing the viewer to identify them and even send the image to a health care facility, according to an article published in the journal PLoS ONE. To use the device, called the CellScope, fluorescent molecular "tags" are added to a blood sample, which attach themselves to a certain pathogen, such as tuberclosis-causing bacteria. The pathogens are then illuminated by microscope, which

uses cheap commercial light-emitting diodes as the light source - in place of the high-power, gas-filled lamps used in laboratory versions of the device, and cheap optical filters to isolate the light coming from the fluorescent tags [BBC News]. The apparatus allows the viewer to "see" things as small as one-millionth of a meter.

Because the particles that users will be looking for, such as a certain bacteria, light up, successfully identifying the pathogen would require minimal training.

"You don't have to deal with a messy background," Breslauer explained. "Only what you're looking for lights up" [CBC]. The researchers estimate that the first CellScopes cost about $1,000 apiece to produce, but once a few thousand have been produced, the price could drop to a few hundred dollars--including the cell phone.

It might not take long for clinics and other health care centers to start using the technology, the researchers say.

"Since we are developing a technology that makes the current and long-standing internationally accepted standards for disease screening in developing countries more portable, we anticipate that a relatively fast time to adoption by clinicians and health workers may be possible" [The Guardian], the authors wrote in the paper. And if the phones are outfitted with GPS and Internet capabilities, CellScope could even record and track the spread of disease.

Related Content: 80beats: Diagnostic Lab Made of Paper and Tape Could Lead to a 3-Cent HIV Test 80beats: Researchers Work Towards a Shirt That Can Take Pictures 80beats:Dime-Sized Microscope Could Be a Boon for Developing World HealthImage: Daniel Fletcher