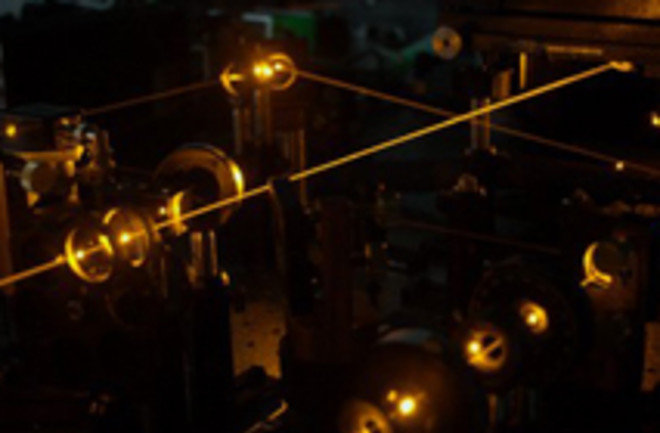 Computers powered by frickin' laser beams just came a step closer. Light-based, or photonic, computers would theoretically be much faster and smaller than the electronic computers we use today, but researchers have had a hard time putting theory into action. Now, a new study has shown that two laser beams can be harnassed to turn a single molecule into a transistor. However, the specialized conditions necessary for the trick to work mean that computer stores won't have photonic sections anytime soon.

In the study, published in Nature, the green beam could make the orange beam either weak or strong, which is analagous to an electronic transistor turning a current on or off.

In the experiment, the researchers

suspended tetradecane, a hydrocarbon dye, in an organic liquid. They then froze the suspension to -272 °C using liquid helium – creating a crystalline matrix in which individual dye molecules could be targeted with lasers. When a finely tuned orange laser beam is trained on a dye molecule, it efficiently soaks up most of it up – leaving a much weaker "output" beam to continue beyond the dye [New Scientist].

But when a green laser beam is also focused on the dye molecule, the molecule absorbs the green light instead and releases energy in the form of orange light, which effectively boosts the orange output beam. Such a system could theoretically be used in an all-optical circuit, researchers say, although the cost of keeping the materials so cold would be quite high. But the system still holds plenty of interest for researchers, who say that the

experiments could lead to high-density packaging of nanometre-sized all-optical transistors. Theoretical calculations by the team also show that it should be possible to build complex circuits where many single emitters are coupled to tiny waveguides that carry optical signals on a chip [Physics World].