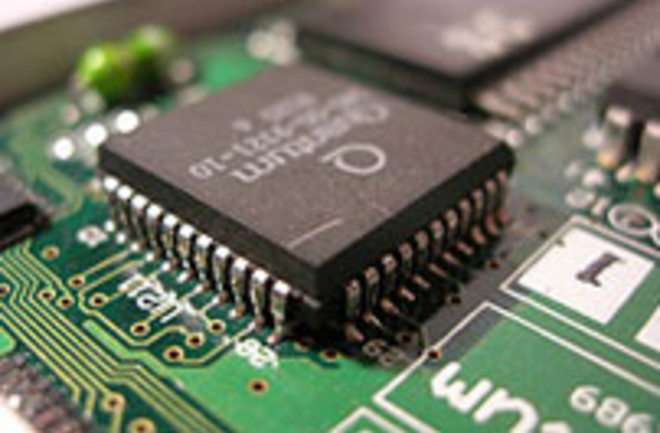 Each year, as electronic devices get smaller and capable of performing more outlandish functions, engineers in the back rooms of computer chip manufacturers sweat a little more. The exponentially-increasing number of transmitters that can be placed on a circuit board (a phenomenon known as Moore's law) brings with it one major technological obstacle: a rise in heat produced by the electrons that zip through the tiny wires on each chip. Computer engineers have experimented with many different solutions to the heat problem, including fans and heat sinks. Yesterday, IBM announced a radically new approach, and unveiled stacks of chips cooled by thousands of hair-thin pipes filled with flowing water. An IBM spokesperson said the need for a new tactic became apparent as the company worked on its 3D chips, which are stacked on top of each other instead of arranged side-by-side in the traditional manner. This arrangement reduces distances between circuits and therefore reduce processing time, but it's also prone to overheating.

"As we package chips on top of each other....we have found that conventional coolers attached to the back of a chip don't scale," explained Thomas Brunschwiler at IBM's Zurich Research Laboratory. "In order to exploit the potential of high-performance 3D chip stacking, we need interlayer cooling" [BBC News].

Water pipes are already used to cool some high-end servers and supercomputers, but those existing systems pump the water past the processor; the new IBM approach is the first to put the pipes inside the chips themselves. While that may conjure up nightmare images of a short-circuiting computer, IBM says the water pipes will be perfectly harmless.

In IBM's design, the liquid travels through hermetically sealed, double-layered tubes of silicon and silicon oxide that are roughly .002 inches (about the width of a hair) in diameter keeping the H2O well insulated from delicate components [PC World].

The company hopes to bring the technology to its commercial products within five years.